Team to End AIDS primed and ready for Chicago Marathon 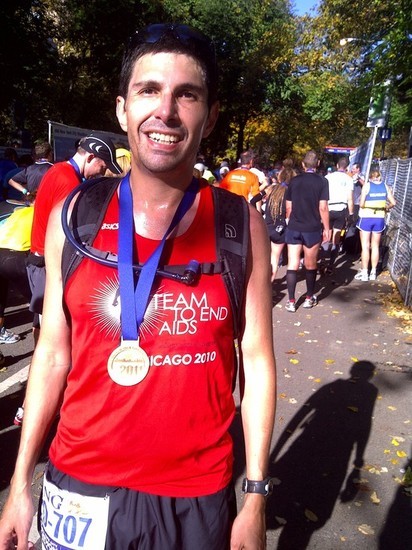 LGBT community invited to show support for runners and T2EA

Chicago, IL - This Sunday, almost 50,000 runners will participate in the 36th annual Chicago Marathon, sponsored by Bank of America, and nearly two million will watch. Among participants will be over 200 members of AIDS Foundation of Chicago (AFC)-sponsored offshoot Team to End AIDS (T2EA), including AFC CEO and T2EA participant David Ernesto Munar.

"There are 207 runner/athletes, including a small group of AFC employees, but the vast majority of people who have signed up to run the marathon signed up as individuals to fundraise for the foundation," Munar told ChicagoPride.com.

"Many have done it year after year; some start with the marathon and graduate to other programs [such as the triathlon or half-marathon], and some train for endurance. The point of the [T2EA] program is to involve or encourage people who want to engage in a training program and want to do it for a cause," added Munar. "It's an incredible group of people. The camaraderie is very phenomenal."

According to Jessica Syburg, AFC Development Coordinator, over $420,000 has been raised so far by athletes, who started signing up and raising money toward the start of the year via corporate sponsors such as Fleet Feet Sports, Aligned Modern Health, FFC Fit Formula Clubs, and Tri-Monster.net, also including many individual sponsors.

Syburg said fundraising will continue for the rest of the year, and often efforts will spike after athletes have actually completed their participation in the event.

"It's a big triumphant weekend for a lot of people very near and dear to our organization," commented Syburg. "It's a very big inspiration time for us here at the AIDS Foundation of Chicago."

Syburg is responsible for coordinating the annual AIDS Run & Walk Chicago, and said she would be attending the marathon in part to glean ideas for that event from larger events such as the Chicago Marathon, as well as generally assisting the team tent on a volunteer basis.

"Most of the fundraising resources go to the [AFC] charity; the exact amount will depend on what our individual members do until the end. Our goal is to raise $500,000 or more, and we think that's possible," he said, adding that number would be on par with last year's results.

According to Munar, the AFC group has been training athletes for over 10 years for endurance sports such as the marathon, and used to be part of the National AIDS Marathon Training Program. In 2009 that national program ended, and the Team to End AIDS was announced. Within a year or two the group introduced the triathlon and half-marathon events.

"This program is perfectly suited for getting everyone prepared physically or mentally for a challenge like these events," Munar added.

Among the runners this year will be Keith Pufford, Team Manager of the T2EA Training Program. Cecilia Boyd, also T2EA Team Manager, will man the group's tent in Charity Village, helping runners prepare for the big day. The race will start from nearby Grant Park.

Members of the team who are not running will gather at Mile 19 Sunday to cheer on T2EA. David Hackett, Terrill Tyler, Tim Egan, Mark Timson, Stephen Swanberg and Dan Cornejo will host an all-day event from which the LGBT community can come out and support the runners. A party bus will be located on the parking lot of the Costco located at 1430 S Ashland. More information about the cheering section is available on their Facebook event page.

Last night Munar, Boyd, Pufford and others participated in a pot luck-type dinner at the Embassy Suites Hotel on Columbus Drive. They coordinated dinner for athlete participants, made presentations for new marathon security requirements, and said they planned to generally enjoy themselves for the last evening before they will have to get to sleep early Saturday night for the 4:30 a.m. kick-off on Sunday morning for the race, when participants will meet at the Charity Village tent before moving on to their corrals at approximately 6:15. The race begins shortly after 7 a.m.

"My personal best time for the marathon was in Hawaii, 3 hours and 42 minutes," said Munar. "I always want to improve but I don't think it will be Sunday. My schedule has been tight this year and my training category was interrupted at the 23 mile mark. I'm going to be taking it slow. I just want to have a good run. Every race has its own challenges."

Munar, who is a 12-time marathon runner, told ChicagoPride.com that he hopes to use the Chicago Marathon as training for the New York Marathon November 3.

Of the group's athlete participants he stated, "We are so proud of them, incredible, cool people from all walks of life. We have spent every Saturday with them, seen their highs and lows. We are really close to these people who have made great accomplishments in as far as what they've raised and the number of people they've involved."

"It's a lot of love, we're excited," Munar concluded.

Related: OpEd: The Mark of a Runner: T2+, written by David Ernesto Munar

The Bank of America Chicago Marathon will start in Grant Park on Columbus Drive Sunday morning shortly after 7 a.m. Runners will travel as far north as Addison, west to Damen Avenue and as far south as West 35th Street. The marathon ends back at Grant Park.

Added this year to the marathon are several additional security features, including special requirements for how runners get to their corrals, due in part to the Boston Marathon bombings.

According to a University of Illinois at Champaign-Urbana Regional Economics Applications Laboratory report, the Chicago Marathon raises millions of dollars for a variety of charitable causes while generating $243M total.

Watch the Chicago Marathon beginning at 7 a.m. on NBC 5 Chicago or online at nbcchicago.com.

On the Web: Team to End AIDS www.t2ea.com