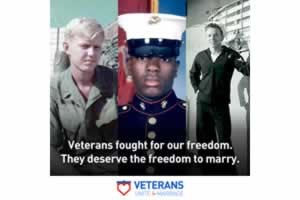 A group called Veterans Unite for Marriage is calling on the Illinois House to approve a marriage bill when it reconvenes later this month.

"It is overwhelming to me that despite my years of service for our country, I am not afforded the same marital rights as straight couples," said Clayton Peterson, a U.S. Army and Vietnam War Veteran. "I fought for this country to uphold our freedoms and to allow all Americans to live and love who they wish. It is sad that these freedoms do not apply to my spouse and I in our home state of Illinois."

The marriage bill stalled in the House after clearing the Senate on Valentine's Day.

Illinois is one of four states where gay and lesbian couples are recognized with civil unions, not marriage – the other three are New Jersey, Hawaii and Colorado.Following a Supreme Court decision in June which gutted much of the Defense of Marriage Act (DOMA), the federal government started recognizing the unions of gay couples in a marriage, leaving couples in a civil union at a distinct disadvantage in terms of benefits.

"Illinois' veterans are among those hardest hit by the state's continued refusal to extend marriage to same-sex couples," Illinois Unites for Marriage, the coalition of groups lobbying to approve the measure, said in a press release. "According to federal statutes, the VA will only grant benefits to service couples whose marriage is recognized legally in their home state."