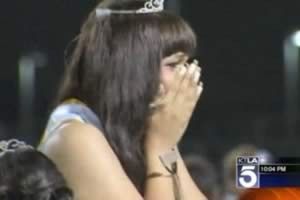 Los Angeles, CA - A transgender teen was named homecoming queen of a high school in California on Friday.

Campbell, a senior, began her transition while in high school.

"If I win it would mean that the school recognizes me as the gender I always felt I was," the 16-year-old Campbell told The Los Angeles Times. "But with all the attention, I realize it's bigger than me. I'm doing this for the kids who can't be themselves."

The field of 10 homecoming queen candidates was narrowed to 5 during a homecoming pep rally on Friday.

Tom Delapp, a school district spokesman, told the Times that the 5 finalists were called up during the homecoming game halftime and that balloons were released from boxes to announce the winner. Only Campbell's balloons were gold and blue, the school colors.

"[Campbell] was stunned," Delapp said. "She kind of broke down on the podium. She was shocked. She cried a lot."

Students chanted her name and gave her hugs.

"I was so proud to win, not just for me bur for everyone out there," she told reporters afterward. "I think it really shows the progression of the times."