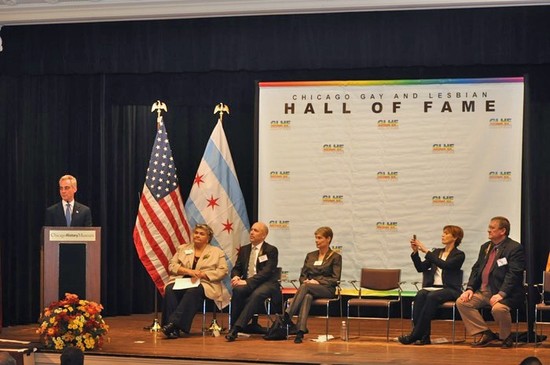 Chicago, IL - Fourteen individuals and two organizations will be inducted Nov. 12 into the Chicago Gay and Lesbian Hall of Fame, the country's only known government-sponsored hall of fame that honors members of the lesbian, gay, bisexual, and transgender (LGBT) communities.

The inductees were selected by a committee composed of former inductees, which reviewed nominations submitted by members of the public. The names were released by Friends of the Chicago Gay and Lesbian Hall of Fame, a section 501(c)(3) nonprofit organization.

The chosen nominees will be inducted at the Hall of Fame's annual ceremony, which will take place from 5:30 p.m. until 7 p.m. on Tuesday, Nov. 12, at the Chicago History Museum, 1601 N. Clark St., Chicago. A reception begins at 5:30 p.m., and the program is scheduled for 6 p.m. The event is free and open to the public.

Mary F. Morten, a respected Chicago women's- and LGBT-rights activist and a former LGBT mayoral liaison under Mayor Richard M. Daley, was recently elected as the new co-chairperson of Friends of the Chicago Gay and Lesbian Hall of Fame. "I'm excited to step into this role as co-chair," she said, "and I look forward to supporting an institution that has consistently recognized the best and the brightest from our communities and our allies. This year's inductees are no exception."

"We welcome the 2013 inductees' addition," said Israel Wright, executive director of the Friends organization. "It continues to show how the important contributions from our LGBT communities and from our friends pave the way for the future. It is humbling to recognize each inductee's special efforts to create change in ways that affect us all so greatly."

Hall of Fame inductees fall into one of three categories: "individual," "organization," or "friend of the community." Nominees represent all of Chicago's sexual-minority communities, including LGBT Chicagoans, past, present, living, and dead, as well as those who have supported or assisted them.

Gaylon B. Alcaraz, 42, for almost 20 years of work on behalf of women's reproductive freedom, the interests of African American lesbian and bisexual women, adolescent health, and other social concerns. She was a founder of Affinity Community Services, a South Side social-justice group, and is the Chicago Abortion Fund's executive director.

James L. Bennett, 48, for his leadership in the nonprofit community and a career as a comedic writer and performer. He has fought for social justice in the United Methodist Church and through other groups.   He has written and performed in 14 sketch- comedy revues and appears and emcees at radio and staged events. He is the Midwest regional director for Lambda Legal.

Jorge Cestou, 41, for 16 years of social-service activism, organizing, and leadership in LGBT Latina/o and HIV/AIDS organizations locally and nationally, as well as in the Chicago leather community. He is director of programs and services for Vida/SIDA, a Latina/o AIDS  service organization in Chicago.

Rocco J. Claps, 52, for public service in political and government roles as an openly gay man and for advancing LGBT rights goals. He began on Illinois House Speaker Mike Madigan's staff in 1987, worked in federal and Democratic National Committee positions during the Clinton administration, and since 2003 has been director of the Illinois Department of Human Rights.

Rudolph Johnson, Jr. (1947–2006), for 23 years as a well-known and well-regarded North Halsted Street bar owner who led the Northalsted Merchants Association and other neighborhood groups, instituted and promoted local festivals, sponsored sports leagues and events, and lent and recruited support for a wide array of LGBT nonprofit organizations and pro-LGBT politicians.

Lee A. Newell II, 64, for his community service in Chicago from 1976 to 2001. He led the financial revival and growth of Gay Horizons (an early precursor of today's Center on Halsted); documented local events, assembling what is now a Chicago History Museum collection of some 5,000 photos; led the city's first LGBT PAC; and was an officer in neighborhood groups.

Paté, 55, for her community involvement since 1986 as a bartender in numerous venues, where she has built a loyal customer base, won mixology awards, and volunteered and raised funds for numerous organizations, while also devoting countless hours to organizations rescuing and rehoming lost, neglected, and discarded pet animals, both locally and after Hurricane Katrina.

Andrew Patner, 53, for more than three decades as a journalist, editor, biographer, lecturer, teacher, and internationally active arts critic and interviewer in print and electronic media, besides media advocacy since 1979 for LGBT and HIV/AIDS concerns. A lifelong Chicagoan, he is critic-at-large for WFMT Fine Arts Radio and contributing critic to the Chicago Sun-Times.

Laura Ricketts, 46, for generous donor support and board service to LGBT and non-LGBT organizations, including Lambda Legal, Housing Opportunities for Women, GayCo Productions, Opportunity Education, and Democratic Party entities. She has backed ecotourism and, as a part owner of the Chicago Cubs, is the first openly LGBT owner of a Major League Baseball team.

Burr Tillstrom (1917–1985), a native Chicagoan, for his contributions to the early days of television and in particular for his creation of unforgettable puppet characters such as Kukla and Ollie. He enriched the lives of children and adults through the Kukla, Fran and Ollie show with co-host Fran Allison, as well as through other performances over five decades beginning in 1936.

David Zak, 58, for 31 years of producing and directing Chicago and LGBT theater as well as developing new stage and screen plays, especially through the former Bailiwick Repertory's Pride Series and now through Pride Films and Plays. He has won numerous awards, has directed in cities around the world, and has helped to enrich LGBT lives and advance social equality.

POW-WOW (once formally known as Performers or Writers for Women on Women's Issues, Inc.), for 10 years of offering an open and affirming space for women, especially those of color, to create and present artistic performances and writing, as well as helping women and girls re-entering society to develop artistic careers and providing socially relevant, arts-based literacy programs.

"Friend of the Community" Category

Neil Steinberg, 53, for 26 years as a Chicago Sun-Times writer or columnist who has repeatedly portrayed LGBT lives and social-justice issues while insightfully commenting on them. His work has contributed to better public understanding and has often been produced when issues were more unpopular than now, such as human-rights laws in the 1980s and marriage rights in 1996.

Brenda Webb, 60, executive director of Chicago Filmmakers, for her 32 years of perseverance as organizer of Reeling, the Chicago LGBT international film festival. Reeling is said to be the world's second-oldest such festival and has become a major cultural event for Chicago's LGBT communities and the city's general arts and culture scene.

The Chicago Gay and Lesbian Hall of Fame was established in 1991 under the auspices of what was then the Chicago Commission on Human Relations' Advisory Council on Gay and Lesbian (later, Lesbian, Gay, Bisexual and Transgender) Issues, a municipal government agency. At the end of 2011, the advisory council ceased to exist after a commission restructuring, and the Friends organization succeeded it as caretaker of the Hall of Fame in partnership with city government.

Beginning with the first ceremony in 1991, former Mayor Richard M. Daley personally participated in the Hall of Fame's induction ceremonies. Current Mayor Rahm Emanuel has continued to do so.

The Hall of Fame's purpose is to recognize the achievements of LGBT Chicagoans, their contributions to the development of the city, and the help they have received from others. In 2013, it holds its 23rd annual induction ceremony and continues to represent an official recognition by Chicago's government of the city's LGBT residents and their allies.

Those selected for the "individual" category are or were members of Chicago's LGBT communities and have made single far-reaching or significant long-term contributions to the quality of life of those communities or of the city as a whole. Those in the "organization" category are LGBT businesses and nonprofit groups that have done likewise. "Friends of the community" are non-LGBT-identified individuals and organizations that have contributed to the quality of life of the city's LGBT communities.