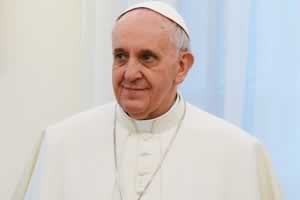 Pope Francis, the leader of over1 billion Roman Catholics worldwide, on Thursday said that the church needs to be a more welcoming place for all.

According to the AP, Francis was talking about the church's rules about abortion, gays and contraception when he said: "The church's pastoral ministry cannot be obsessed with the transmission of a disjointed multitude of doctrines to be imposed insistently. We have to find a new balance; otherwise even the moral edifice of the church is likely to fall like a house of cards, losing the freshness and fragrance of the Gospel."

"The church sometimes has locked itself up in small things, in small-minded rules. The most important thing is the first proclamation: Jesus Christ has saved you. And the ministers of the church must be ministers of mercy above all," the Holy Father said in a wide-ranging interview with the Italian Jesuit magazine La Civilta Cattolica.

While Francis said that church doctrine on abortion, gay nuptials and contraception was clear and that he was a "son of the church," he added that "it is not necessary to talk about these issues all the time."

The pope also addressed his previous remarks about gay priests.

"If someone is gay and he searches for the Lord and has good will, who am I to judge? Francis rhetorically asked reporters aboard the papal aircraft on the journey back to the Vatican from his first foreign trip to Brazil.

"A person once asked me, in a provocative manner, if I approve of homosexuality," Francis said in the interview. "I replied with another question: 'Tell me: When God looks at a gay person, does he endorse the existence of this person with love, or reject and condemn this person?'"

"We must always consider the person," he continued. "In life, God accompanies persons, and we must accompany them, starting from their situation. It is necessary to accompany them with mercy."

He added that the church should be "the home of all, not a small chapel that can hold only a small group of selected people."