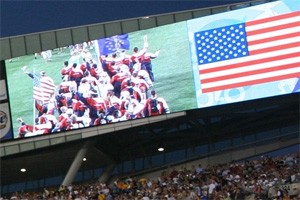 Chicago, IL - One year after Chicago hosted nearly 12,000 sport and cultural participants at the 2006 Gay Games®, Chicago Games, Inc., (CGI) the host organization for the event, announced today that it has completed the post-Games fundraising and wind down process and that the 2006 Gay Games broke even. Such a positive financial result reverses a 20-year trend, having not been achieved since Gay Games II in 1986. CGI accomplished the result with 2 fewer years planning time than most Gay Games.

"We are extremely grateful to our many donors, sponsors, volunteers, partners and vendors whose commitment and contributions made today's announcement possible," said Tracy Baim, CGI board Co-Vice Chair and leader of the wind-down efforts. "Each deserves the appreciation of our city and the worldwide LGBT sports community."

Sponsors and donors remain listed on the Gay Games website at GayGamesChicago.org.

"We would like to extend special appreciation to partners Dick Uyvari and Joe La Pat, Chicagoans who significantly funded the 2006 Gay Games international scholarship program and created a Gay Games matching grant program to assist in the post-Games fundraising," said Sam Coady, CGI Board Co-Chair.

After a heat wave and other circumstances increased expenses and created the need for additional fundraising, Uyvari and La Pat donated additional financial support. Uvyari is a long-time Gay Games supporter, having competed in six of the seven Gay Games. Other key post-Games donors included Fred Eychaner, Michael Leppen, and former U.S. Ambassador James Hormel and his partner, Tim Wu.

"We also extend a special thanks to the international Federation of Gay Games for their significant assistance in ensuring that the 2006 Gay Games finished in a financially sound position," said Kevin Boyer, CGI Board Co-Vice Chair. The FGG is the international governing body of the quadrennial sports & cultural festival. Going forward, the FGG will continue to receive royalties from the 2006 Gay Games DVD, photography-based products and residual commemorative merchandise sales.

Financial Promises Kept
"In 2003 when we launched the bid to host the 2006 Gay Games, we promised our local LGBT community, the City of Chicago, and the worldwide LGBT sports movement that the 2006 Gay Games would break even financially," said Sam Coady. "We also made the commitment to leave a lasting and positive legacy for future Gay Games hosts - a sound business model upon which future Gay Games could be built. We are proud today to have fulfilled those promises."

The Gay Games have always been a boon for the local economy. Nevertheless, the past three Gay Games host committees lost significant amounts of money, threatening the future of the quadrennial sports & culture festival. For the first time ever, the Gay Games also faced a competing LGBT sports event. Held in Montreal just one week after the Gay Games, that competing event's host organization ended up losing several million dollars.

The 2006 Gay Games themselves contributed $50 to $80 million to the local economy, with some estimating that another 10 years of positive LGBT tourism visibility will generate millions more dollars in the long term.

"We promised our community that our Gay Games fundraising campaign would not undercut other important community projects, including the Center on Halsted," said Suzanne Arnold, Board Co-Chair. "Three-and-one-half-years later, our beautiful new community center is open and Chicago's LGBT community is stronger than ever. Our local LGBT sports organizations are the strongest they've ever been, offering more sports to more people than ever before."

Legacy for Chicago and Cologne
"Looking to the future, we're proud to have helped inspire our great Mayor Richard M. Daley to launch a bid for the 2016 Olympic Games®," said Kevin Boyer. "Our experience has demonstrated that Chicagoans come together in support of great and important civic endeavors, and we know that almost 3,000 Gay Games-trained volunteers and 400 business sponsors stand ready to help Chicago host the 2016 Olympics."

"At the Gay Games VII Closing Ceremony on July 22, 2006, Chicago passed the symbols of the Gay Games to Cologne, Germany, the host of the 2010 Gay Games," said Tracy Baim. "Today, we give to Cologne an even more important legacy - a Gay Games movement that is stronger and more vibrant. We look forward to coming together once again in just three years in celebration of the fundamental principles of Dr. Tom Waddell and the Gay Games - Participation, Inclusion and Personal Best(tm). See you in Cologne!"

Related: View photos from the Gay Games VII in Chicago