Joe Biden calls gay marriage the 'issue of our day' 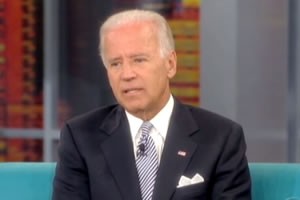 Biden first endorsed gay marriage last year during an appearance on NBC's Meet the Press, telling host David Gregory that he is "absolutely comfortable with the fact that men marrying men, women marrying women," but added, "The president sets the policy."

"A lot of people criticized me for speaking out, not long ago, about gay marriage," Biden told those attending an annual steak-fry fundraiser on Sunday hosted by Senator Tom Harkin, a Democrat from Iowa. "It's the civil rights of our day. It's the issue of our day."

In a recent interview with Rolling Stone, Biden said that he declared his support because he "couldn't be quiet about it anymore" and added that the president didn't criticize him.

"I got blowback from everybody but the president," Biden said."I walked in that Monday, he had a big grin on his face, he put his arms around me and said, 'Well, Joe, God love you, you say what you think.' I knew he agreed with me. It wasn't like he was in a different place."