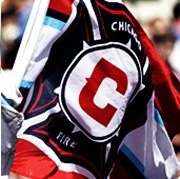 Chicago, IL - Get ready soccer fans! The Chicago Fire invites you to "come celebrate equality" at their second annual Pride Night, Saturday September 28, for their game against the Montreal Impact at Toyota Stadium in Bridgeview. Last year's game was the culmination of the soccer team's newly announced partnership with Equality Illinois, which was hailed by Crain's Chicago Business as the first "formal partnership" between a local sports team and an LGBT advocacy group.

Beyond last year's Pride Initiative, players with the Chicago Fire also joined with Equality Illinois for their annual Pie Toss fundraiser and participated at several First Friday initiatives, as well as a few other events the LGBT advocacy organization hosted throughout the year. A portion of all this year's ticket sales will once again go to Equality Illinois.

"It was a building block and we continue to build very strong relationships within the LGBT community. Earlier this year, our senior director of communications took part in hearings regarding a historic resolution regarding LGBT athletes that was passed by the Chicago City Council," Adam Green, an account executive with the Chicago Fire helping to organize Pride Night, told ChicagoPride.com. He also added:

"I would say that it also goes beyond Chicago and the Fire, as you have seen with MLS and its prominent "Don't Cross the Line" campaign this season, which promotes unity, respect, fair play, equality and acceptance throughout the soccer community."

The soccer team is expanding their Pride Night this year, adding the Chicago Metro Sports Association (CMSA) -- the Midwest's largest not-for-profit LGBT sports organization -- to the roster of sponsors. They also reached out to the boys at BestGayCities after seeing the success of their first Out in the Park event last year and are joining with Section 8 (the Chicago Fire's Independent Supporters' Association) to organize a pre-game concert and tailgating party.

The event starts at 4:30 p.m., with performances by Jess Godwin and Isaiah Grass, both of whom are also performing at this coming Saturday's Out in the Park at Six Flags Great America, as well as other local bands slated to begin at 5. Partygoers are welcome to bring their own food and drink, but Section 8 is also opening their tailgate for the Pride Initiative and will have food and beverages available for purchase in exchange for a small donation.

"The reason we support the Pride Initiative and many other social initiatives is that a core value of the Fire is to make a positive difference in the community," Green said. "We're committed to bringing people together and creating a common passion and bond in the sport of soccer, regardless of age, sex, race, religion, disability, etc. We are also very proud that our club is as diverse as the community that supports us and welcome all Fire supporters."

Tickets for the game are being sold at a discounted rate of $20 and if you're worried about getting to the southwest suburb of Bridgeview, or don't want the hassle of driving, coach bus transportation to and from the city is available for $12 more. The busses, which are BYOB, are leaving from AJ Hudson's, 3801 N. Ashland, and Galway Arms, 2442 Clark St., at 4:30 and 5:00 p.m., respectively.

Tickets are available online. Once purchased, tickets can be printed and Green will follow up directly with those who purchase a bus ticket to inquire after which bar they want to leave form.

"We want this to a party and a celebration when all are welcome," Green said, and he encourages everyone to bring Pride flags and banners to the tailgate and game. "Be ready to stand, sing and participate!"