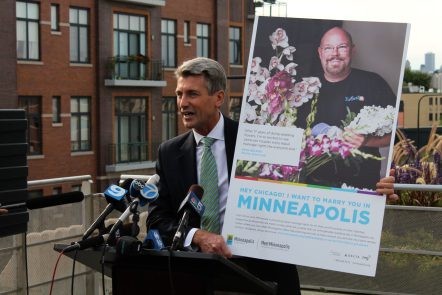 Chicago, IL - Minneapolis Mayor R.T. Rybak was in Chicago Thursday to unveil a new digital and print campaign designed to draw same-sex couples from Chicago to Minneapolis where they can get legally married.

Rybak announced the "I Want to Marry You in Minneapolis" campaign during a press conference Thursday morning at Center on Halsted, which is located in Chicago's Boystown neighborhood.

"Chicago is my kind of town, but it's a second city in human rights," Rybak told reporters. "Right now that gives a tremendous competitive advantage to Minneapolis. The people who built this neighborhood, who have done so much incredible work for this community, you deserve equal rights. Come to Minnesota, a place that already recognizes that you should have those rights."

Rybak, a long-standing advocate for the freedom for all couples to marry, strongly encourages Illinois lawmakers and Governor Pat Quinn to pass marriage equality in Illinois — but until they do, he will continue to invite gay and lesbian Chicagoans to make the trip to Minneapolis where marriage equality has been in effect since August 1.

Anthony Martinez, the executive director of The Civil Rights Agenda, joined Rybak to represent Illinois Unites for Marriage, a coalition supporting the freedom to marry. Martinez cited a recent study by the Williams Institute at the University of California, Los Angeles, estimating marriage equality could add $100 million to Illinois' economy.

"It's also an economic issue, and has real impact and cost to our hospitality and tourism industries," Martinez said. "And while I'm delighted to see Minneapolis and the state of Minnesota benefit economically, I'm equal part distressed that Illinois is losing out on these economic dividends, especially when our economic reality is so dire."

On Wednesday, political and tourism leaders from Illinois, including Chicago Mayor Rahm Emanuel and Gov. Quinn, through Illinois Unites for Marriage issued statements in response to the Minneapolis ad campaign.

"Thirteen states have extended marriage to all loving, committed couples – but Illinois has not. That is bad for Chicago, bad for Illinois, and bad for our local economy and the jobs it creates," said Emanuel. "Our robust tourism and hospitality industries will thrive most fully when our state hangs out the 'welcome' sign for everybody."

The Religious Freedom and Marriage Fairness Act cleared the Illinois Senate on February 14, but stalled in the House on May 31. Lawmakers are expected to reconsider the measure when they return to Springfield in November.

The ad campaign, which is sponsored by Minneapolis' convention and visitors' association, will also launch in multiple Midwest cities including Milwaukee, Madison and Denver. The ads in Chicago have already started appearing in LGBT newsweekly Windy City Times.

"So come on up to Minneapolis," Rybak concluded on Thursday. "Some day I hope Mayor Emanuel can come up and try to steal the same type of business out of Minneapolis, but in the meantime welcome to Minneapolis. We want to marry you."