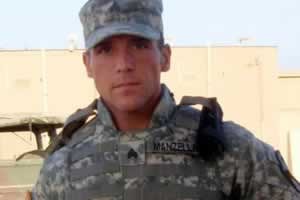 Rochester, NY - Army Sargent Darren Manzella, the first active duty combat servicemember to publicly disclose that he was gay, has died. He was 36.

The Democrat and Chronicle quotes Cpl. John Helfer of the Monroe County Sheriff's Office as saying that Manzella stopped his car in the middle westbound lane of Interstate 490 after his car sideswiped another about 8:30 PM. Manzella got out of his car and started to push it from behind when he was struck by an SUV. Helfer said that Manzella was pronounced dead at the scene.

In 2007, Manzella revealed to 60 Minutes' Leslie Stahl that he had been serving openly. He said that he acknowledged to superiors investigating him that he was gay without incident.

Manzella enlisted in the U.S. Army in 2002 and was twice deployed to the Middle East in support of Operation Iraqi Freedom. He was awarded the Combat Medical Badge for providing medical care under fire during the Iraq war.

After CBS aired the story, the Army handed down a determination of ineligibility, and Manzella was discharged under "Don't Ask, Don't Tell" in 2008. The policy, which prohibited gay troops from serving openly, was repealed three years later.

Steve Ralls, who coordinated Manzella's coming out on 60 Minutes, told gay blog Bilerico.com that Manzella knew that he would be discharged for speaking out.

"That's how passionate he was about ending this policy," Ralls said.

Manzella and Javier Lapeira-Soto married on July 5. A friend said that he had recently rejoined the military as a reservist.