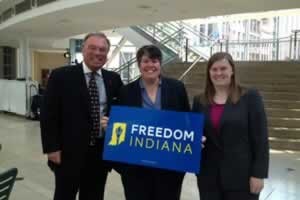 Rob Smith, senior director of corporate responsibility at Eli Lilly, joined roughly 200 people at a rally in downtown Indianapolis to kick off the Freedom Indiana campaign.

Republican lawmakers, including Governor Mike Pence, are pushing for a 2014 referendum on House Joint Resolution 6 (HJR-6), a constitutional amendment which would define marriage as a heterosexual union and prohibit civil unions as an alternative to marriage.

"HJR-6 is bad for business and bad for the state of Indiana," Smith told the crowd. "We take our commitment to corporate citizenship very seriously at Lilly. We care very deeply about the state of Indiana, the state that we call home. And as we think about our business in the pharmaceutical industry we are trying to tackle some of the most difficult, complex health challenges known to mankind. And in that effort we have to recruit and retain a diverse workforce consisting of the best and brightest from around the world.Those efforts are made much more difficult when we have things like HJR-6 contemplated. Putting HJR-6 into our state's most important legal document presents a barrier to us in recruiting and retaining that great talent."

The proposed amendment sailed through the Republican-controlled General Assembly in 2011. A second vote needed before it can go to the ballot box is expected to take place next year.

Soon after the U.S. Supreme Court struck down the Defense of Marriage Act (DOMA) in June, Pence reaffirmed his commitment to the amendment, saying that he was "confident that Hoosiers will reaffirm our commitment to traditional marriage and will consider this important question with civility and respect for the values and dignity of all of the people of our state."