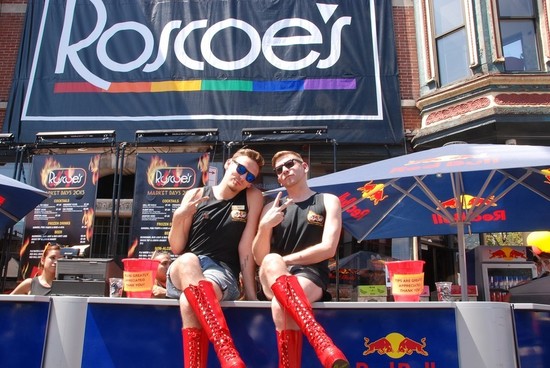 Chicago, IL - After competing and placing in the top 10 in San Francisco last year, Team Roscoe's, better known as Team 'Hell on Heels', is back to compete in the 2013 Chicago Red Bull Flugtag, an event featuring homemade "flying" vehicles falling into water.

'Hell on Heels' was to compete in Chicago last year, but unsafe weather conditions caused the event to be cancelled. Not to be disappointed the Chicago team took to their craft "Phoebe" to the West Coast and competed in the San Francisco Red Bull Flugtag, where they finished 10th out of a competitive lot of 35 entries.

Last year's entry was focused around Frida Lay in what the team likes to call the "biggest drag show" ever performed. This year, Frida will remain on the team, but out of drag, as the skit will be a play on "Highway to Hell" and will feature the "tush push" courtesy of dance lessons from Charlie's Chicago.

"We really want this to be a community effort and for everyone to come and not only support us, but just have fun," Roscoe's general manager Brenden Chrisman, who also serves as team captain, told ChicagoPride.com.

This year the 'Hell on Heels' team represents not only Roscoe's Tavern, 3356 N. Halsted, but also Progress Bar, which is situated across the street at 3359 N Halsted. The team is made up of Chrisman, Frida Lay, Eddie Gonzalez, Mario Elias, Dave Sineni, David Sikora and Shawn Hazen.

In an effort to build awareness, the entire team, wearing their standard bright-red, knee-high heeled boots, worked outside of Roscoe's during Market Days. To further the excitement, the team also created an entertaining video offering an inside look into their preparation for the 2013 Red Bull Flugtag in Chicago.

"The challenge was to make a video that shows how your team is preparing for the event," said Chrisman. "We think we accomplished this quite well."

The concept video was taped and edited by Rocco Ayala.

Watch the video and then come out to support Team "Hell on Heels' on Sept. 21 in a brand new location, the South Side's Burnham Park. Hangars open at 11 am. First flight at 1 pm.

Red Bull Flugtag events are also happening in D.C., Long Beach, Miami and Dallas/Fort Worth on the same day.