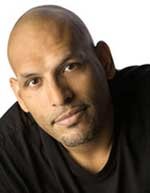 Chicago, IL - PRIDEChicago, the organizers of the Chicago Pride Parade, announced today that John Amaechi will be the Grand Marshal of this year's Chicago 38th Annual Pride Parade on Sunday June 24.

The former NBA player, who recently acknowledged he is gay, told PRIDEChicago coordinator, Richard Pfeiffer that he is honored to be Grand Marshal at this year's parade; and that he specifically wanted to be part of the Pride celebration in Chicago. He also said that he is looking forward to seeing more of the city during his visit.

Amaechi recently completed a book tour for his New York Times bestselling autobiography, Man in the Middle, in which he discusses his life's journey, including his experiences in the NBA, recognizing his sexuality, and subsequent announcement that he is gay. Amaechi, a former player with the Utah Jazz and Orlando Magic, is the first member of the NBA to openly identity himself as gay.

The Chicago Pride Parade on Sunday June 24 starts at 12 Noon from the corner of Halsted & Belmont, proceeding north on Halsted, then south on Broadway, then east on Diversey to Cannon Drive in Lincoln Park. According to PRIDEChicago, more than one-half of the available 250 spots in the parade have already been filled (as of April 9), ahead of last year at this time.

For more information on parade registration, placing ads in the Pride Guide booklet, adding an event to the June Pride Month Calendar or other information, visit www.ChicagoPrideCalendar.org.