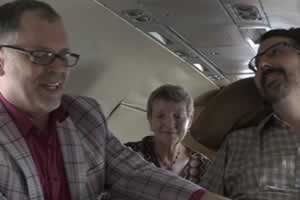 Cincinnati, OH - A male gay couple recently married in Maryland is suing the state of Ohio to recognize their marriage.

The couple has filed a federal lawsuit to have their marriage recognized in Ohio.

"We do hope to build from here and have this be the first step towards marriage equality in Ohio but for now, we just want to make sure that when John dies, the death record shows him as married," the couple's attorney Al Gerhardstein told WKSU.

Ohio Attorney General Mike DeWine has vowed to defend the law in court.

"My job as the attorney general is to defend the constitutionality of Ohio law and that's what we will do," DeWine said.

A federal judge has scheduled an expedited hearing for Monday at 1:30PM.

In 2004, Ohio voters approved a constitutional amendment which prevents the state from recognizing any relationship other than a heterosexual marriage.