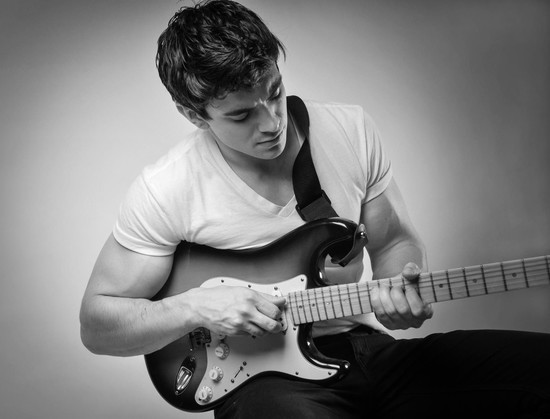 When ChicagoPride.com first reported on Grand last Thursday he was relatively unknown, since the openly-gay country singer has appeared on Good Morning America, been featured by a number publications - including a story by the Associated Press - and now has an entire online fan base known as #GrandFans.

"It's not about being gay, it's about that longing for someone," Grand told GMA of the video, which was directed and edited by award-winning Chicago filmmaker Jason Knade.

To create the video, Grand enlisted his friends and put himself into $7,000 credit card debt. "I funded the song myself," he said, "because I was so obsessed about telling this story."

Grand also talked about his struggle with self and family acceptance growing up, which included being enrolled in straight therapy. He has since gained the support of his parents.

In the country-rock ballad, Grand's lyrics describe an unrequited love. The chorus, which tied into the holiday week release goes, "be my All-American boy tonight where everyday's the 4th of July."

On the day the music video was posted on YouTube, the artist wrote via social networking, "time to be brave. the world does not see change until it sees honesty. I am taking a risk here in many ways, but really there is no choice but to be brave. To not tell this story is to let my soul die. It is all I believe in."

Upon uploading the video that July 2nd, the singer formerly known as Steve Starchild, who performed cover songs in local music venues, began using his own name, Steve Grand.

The friendly and charismatic 23-year old from Lemont, Illinois is a church accompanist and spends his weekends as singer/keyboard performer at the Joynt, a downtown Chicago live music and piano bar.

Near the beginning of the performance at the Joynt this past Saturday evening, where he played "All-American Boy" and a number of hit covers from Elton John, Lady Gaga, Neil Diamond and One Direction, he told the audience that "he hadn't slept all week."

Before his live performance, Grand told ChicagoPride.com that the last week has been overwhelming and that he has been touched by all the stories people have been sharing with him and how they have been impacted by the video.

According to Grand, he's not used to seeing so many eyes looking back at him during his past gigs at the piano bar. "You guys are changing the world," he told spectators.

Video: Steve Grand this past weekend at the Joynt


WickedGayBlog also compiled some photos previously taken of the performer when he was a model, under the names Steve Chatham and Finn Diesel.

Not all gay media is praising the video, however.

In the article "Gay Country Singer: Gay Men Are Sad, Predatory Drunks?" on the Bilerico Project, columnist Mark King wrote, "Gay men drink too much, feel sorry for themselves, and come on to straight dudes when their girlfriends aren't around: that's the message from the music video of newly-minted gay country singer Steve Grand. And gay media is too busy fawning over the young stud to notice."

King continued, "Aside from the fact that gay men are routinely beaten for the kind of actions Grand takes in his video, perhaps he might consider focusing his risk-taking on something truly perilous: the gay dating pool. You know, with actual gay men. That's a shark tank that takes real survival skills."

Read the original story about "All-American Boy" Steve Grand from ChicagoPride.com (with video links including covers by the artist of Journey's "Faithfully" and Lady Gaga's "You and I").