Body found in Lake Michigan, police investigate whether it is missing Loyola student 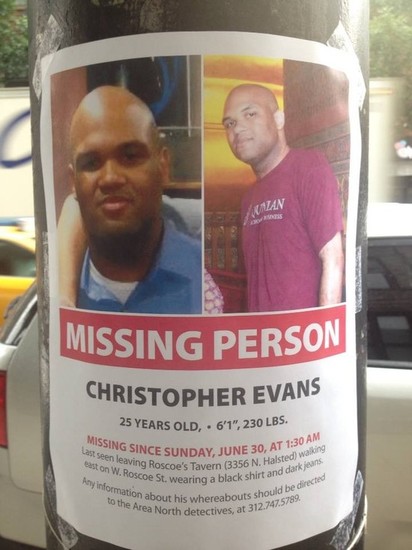 Chicago, IL - A body was recovered from Lake Michigan at Belmont Harbor on the North Side Thursday morning.

The body of a black man in his 20s was recovered by Chicago Police around 9 a.m., but has not been identified.

Police are investigating whether the body is that of Christopher Evans, who was last seen leaving Roscoe's, 3356 N. Halsted St., around 1:30 a.m. on Sun., June 30. The 25-year-old part-time student at Loyola University walked east on W. Roscoe St. after he became nervous and left the bar alone. Friends found his car parked near the intersection of Broadway and Cornelia Ave. on Monday.

Loyola University police arrived on the scene at Belmont Harbor and talked with Chicago police. They would not confirm if the body was Evans, according to ABC 7 Chicago.

Earlier on Thursday, Evans' family offered a $2,000 reward for information about his disappearance.

Friends and family have been passing out flyers in the Boystown neighborhood and friends have also set-up a Facebook page dedicated to finding Evans.

Any information about his whereabouts should be directed to the Area North Detectives, at (312) 747-5789.