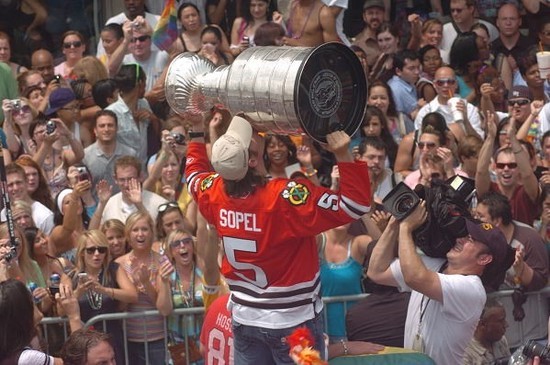 brent sopel with the stanley cup, 2010

Chicago, IL - Chicago has always been known as a sports town with six professional sports teams, two of which are MLB teams, and throngs of impassioned fans in town and out. Recently the local athletic community has added a new face--that of pro-gay allies.

The sporting community and local major league teams have been stepping up to support the LGBTQ community in various ways, most recently with five of the six teams planning to participate in the 44th annual Chicago Pride Parade.

Former NFL player, activist, and openly gay man Wade Davis, who played for the Tennessee Titans, Washington Redskins and Seattle Seahawks, was named the Grand Marshal for this year's parade.

The Chicago Fire Soccer Club also stepped out in support by announcing defender Gonzalo Segares and midfielder Brendan King will ride on the PepsiCo float. Segares and King, both straight allies, will be joined by Fire mascot Sparky.

Also, Chicago Sky Guard and lesbian woman Sharnee Zoll-Norman, a rookie with the Sky in her second season playing in the WNBA, will ride on the KPMG double-decker bus in the parade, along with her wife, Serita Norman, according to the Windy City Times.

Bill Gubrud, executive director of the recently-created National Gay and Lesbian Hall of Fame, said there is clear indication the tide is starting to turn when it comes to gay athletes in professional sports.

"Before it was taboo to even mention gays and sports together in the same sentence and now we are seeing more and more straight allies standing up for the rights of LGBTQ athletes," he said. "I am looking forward to the day where we do not say that someone is the first gay athlete of this team or this sport. I believe that day is right around the corner. Currently there is an openly gay boxer, NBA player and multiple WNBA players."

On Sunday, Davis will be joined by members of the Retired Professional Football Players of Chicago when he participates in the parade this Sunday.

Davis now serves as a nationally recognized speaker, activist, writer and educator, sharing his story as a closeted gay professional athlete. After retirement, Davis opened up about his sexuality and now seeks to shed positive light for LGBT individuals, especially within sports.

"The NFL Players Association Former Players Chapter of Chicago is delighted to support Wade in his crusade to bring more awareness and rally support for the LGBTQ community and particularly, to those who participate in sports," said Sullivan, who serves as president of the association.

Recently, Davis launched the YOU Belong Initiative, a series of 4-day comprehensive sports instruction and leadership development clinics for LGBTQ youth and straight allies that will be offered nationally, one of which to be held July 25th-28th at the Center on Halsted.

Though the recently-won Stanley Cup will not be making an appearance with the Blackhawks, as it did in 2010 when the Chicago Cubs also first participated in the parade, the Chicago Gay Hockey Association will have Blackhawks mascot Tommy Hawk marching with them. There is also a possibility some of the Blackhawks players will join the group.

"The support of the Chicago Blackhawks and other professional sports leagues demonstrates a real commitment to all athletes regardless of sexual orientation or gender identity," said Anthony Alfano, vice president of the Chicago Gay Hockey Assocation. "This is especially true in the NHLs partnership with the 'You Can Play' project. That partnership shows the strides we have taken in breaking down barriers within professional sports. Sports are usually bastions of homophobia, and support like this from the Blackhawks truly is a tremendous effort to open the game up for talented and skilled players who may happen to be LGBTQ."

This year the Stanley Cup will be in New Jersey for NHL draft. In 2010, former Blackhawks' defenseman Brent Sopel brought the cup to the parade as a tribute to the late Miami University Redhawks player and openly gay man Brendan Burke, who died that year in a car accident.

The Chicago Cubs and Chicago Bulls along with Benny the Bull, also have entries in this year's parade. On Sat., Aug. 3, the Cubs will host Out at Wrigley (www.outatwrigley.com), the largest annual LGBT sporting event in the country.

In addition to direct support by marching in the parade, four former and current Chicago athletes came out in support of marriage equality this Spring in an open letter to the Illinois House of Representatives urging them to approve the Religious Freedom and Marriage Fairness Act.

Those signing the letter of support were Ernie "Mr. Cub," Banks, who played shortstop and first baseman for the Chicago Cubs from 1953-1971, Richard Dent, eleven-season veteran of the Chicago Bears, Hunter Hillenmeyer, linebacker for the Bears from 2003-2010 and considered to be comparable to All-Pro stars such as Brian Urlacher, and Brendon Ayanbadejo, Chicago Bears player from 2005-2007 and current Baltimore Ravens linebacker.

The Chicago Pride Parade is set to begin at noon on Sunday, June 30, routing from Broadway and Montrose to Diversey and Cannon Drive. The parade, which will have over 200 entries and is expected to draw more than 850,000 people, is the culmination of June Pride Month in Chicago.

Lauren Spencer-Smith sings her heart out at Lincoln Hall