Second weekend of Pride arrives in Boystown, culminates with Pride Parade on Sunday 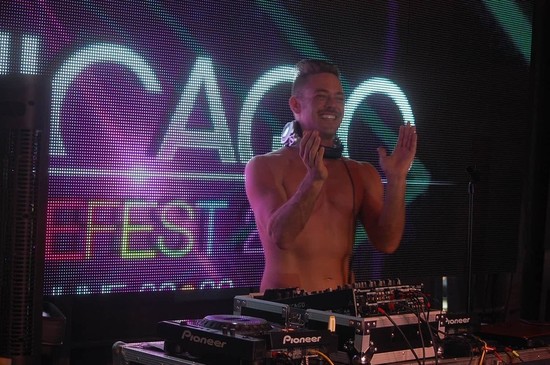 Chicago, IL - Warm temperatures, thwarted rain and lots of sunshine made for a successful first weekend of Pride in Chicago, but it's not over yet. Hopefully last week didn't drain your wallets and test your livers too much because we have another entire weekend ahead of us, all leading up to 44th annual Chicago Pride Parade on Sun., June 30.

Last year's parade attracted an estimated 850,000 Pride revelers to the streets of Boystown and premiered a new route meant to alleviate traffic congestion and increase crowd control. That route is being continued again this year: over 200 floats will step off from Broadway and Montrose in Uptown, with the parade traveling south on Broadway and continuing south on Halsted; they then turn east down Belmont, south down Broadway and east again on Diversey to Cannon Drive.

This year's Grand Marshal is openly gay former NFL football player Wade Davis, who is making Chicago the first home of his recently launched YOU Belong Initiative, a series of 4-day comprehensive sports instruction and leadership development camps for LGBTQ youth and straight allies. Joining Davis will be Marques Sullivan, who has played for the Buffalo Bills, New York Giants, and New England Patriot, and Reggie Smith, who has played for the Denver Broncos, NFL Players Association Media Relations Director Payal Patel confirmed to ChicagoPride.com.

The 204 floats floats behind Davis will include fan favorites like the always elaborate Sidetrack and Roscoe floats and the Windy City Cowboys, groups marching for political causes like as marriage equality (which you can bet will be big now that DOMA is dead) and a whole host of other local businesses and organizations ready to shake and shimmy for Pride!

Don't feel like sweating it out in the crowd this year? Almost all of the bars along Halsted, such as Hydrate Nightclub, Sidetrack and Spin Nightclub, offer opportunities to watch the parade go by from their windows or on their TVs with a cocktail in hand. ChicagoPride.com and GayChicagoTV will also be streaming the Parade live from Cesar's on Broadway.

The weekend officially kicks off Thursday with the Windy City Times' 30 Under 30 and the first night of the annual BackLot Bash. ChicagoPride is proud to personally congratulate two of this year's nominees for the Windy City Times' annual awards honoring 30 outstanding LGBT individuals and allies: both current columnist Terrence Chappel and former staff writer Joe Erbentraut (now with the Huff Post) -- fabulous job, fellas!

The BackLot Bash, described as this weekend's "hottest, most rockin' and most attended outdoor women's festival" starts tonight and runs through Sunday at 5238 N Clark Street (just south of Berwyn), in the heart of Andersonville. Tonight is the comedy kick-off at the Mayne Stage Theater, 1328 W. Morse Avenue, featuring Julie Goldman and Sandra Valls, hosted by Gwen La Roka and with a special guest appearance by Brandy Howard.

Friday through Sunday BackLot Bash will tear up Andersonville with a list of performers that include singer-songwriters like Melissa Ferrick, Edie Carey and Jen Foster on Friday night. Saturday features bands such as Chicago natives Dot Dot Dot, The Student Body and Girlband as well as a fashion show Wake Up Call Tees with Sunday night wrapping up with DJ sets by Uh Huh Her, DJ All the Way Kay and more. Three day weekend discount passes (which don't include Thursday's comedy set) can be purchased online for $30 or $60 for a VIP ticket. Tickets are also available for each individual day for $10-$20 depending on the day. To buy tickets, see a complete lineup and more, check out www.backlotbashchicago.com.

The ph Comedy Theater's hit musical improv comedy show "Same Sex, Different Gays" is back for Pride Month and the rest of the summer. Their truly unique and unforgettable show (you can read more about it in this review from their premiere this February) has be updated with a new cast as well as some new songs and runs every Saturday through August 17 at 9:30 p.m. The shows are BYOB and tickets can be purchased online or at the door for $15 ($10 for students). Also, make sure to look for the fabulous folks of the pH Comedy Theater in this Sunday's Pride Parade!

Of course, the weekend will also be full of fantastic and out-of-this-world club events and parties helping you get your Pride on. The Center on Halsted is hosting Pride and Joy Kickoff, a dance party held on their beautiful rooftop deck overlooking the famed Chicago skyline. Hosted by Cyon Flare, a $20 admission includes four drink tickets from a full service bar available all night. Prospective covermodels can make their way over to Hydrate the same night for their Stoli Model Search. The winner will receive $1000 in cash and prizes and go on to the next round in August.

Also on Friday, the popular Neverland party series presents it's Pride weekend apocalypse-themed bash: Contagion. Moving from their usual location at Sanctuary (in Castle, former Excalibur) in River North, "Contagion" is taking over evilOlive, 1551 W Division street. The party is hosted by the beautiful and iconic Amanda Lepore and features the beats spun by Miami's DJ Cindel and Chicago's own DJ Phil DaBeatz. Pre-sale tickets are available online for $15 until they run out and then they move to $20. VIP tickets are available for $25 in advance, which is the same price you'll pay for your general admission ticket at the door.

Saturday is the 32nd annual Proud to Run, featuring both 5K and 10K races as well as a 2 mile fun walk to raise funds for local LGBTQI charities. This year's beneficiaries are the youth group Links, The Night Ministry and the Test Positive Awareness Network (TPAN). You can still register the day of the race, which takes placeand at the Lakefront on Montrose Avenue at Simmonds Drive, for $40.

Saturday is also the 17th Annual Chicago Dyke March, which takes place in the Argyle neighborhood. Meeting time is set for 2 p.m. with the march stepping off from Margate Park (near Marine and Winona) at 3 p.m., followed by a rally from 4:30-6. More information, including how to become a volunteer, can be found at chicagodykemarch.wordpress.com or by emailing dykemarchchicago@gmail.com.

The Saturday night before the parade sees many a party throughout gay Chicago, including Matthew Harvat's latest Revolution party. Jawbreaker is a sexy and sweet themed event presented in partnership with the Vienna Tourism Board and their popular European party series "Vienna Candy."

Check out CalendarQ from ChicagoPride.com, Nighspots and Windy City Times for more information about these other other events, including all the Saturday night festivities and post-parade bar/club parties on Sunday.

Stay safe, stay hydrated and have fun -- happy Pride, everybody!

For more on Chicago Pride visit the online guide to Pride