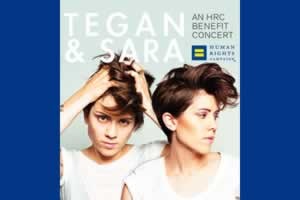 The July 25th event will take place at The Paramount Hotel in Manhattan.

Thirty-two-year-old identical twin sisters Tegan Rain Quin and Sara Keirsten Quin collectively make up Tegan & Sara. After their performance, the openly gay twins will stick around for a Q&A.

"Immediately following the Q&A, the house lights will dim and the venue will be taken over with beats blasting from some of New York's hottest DJs," HRC said in announcing the concert.

Tegan and Sara are currently promoting Heartthrob, their seventh studio album which was released in January.