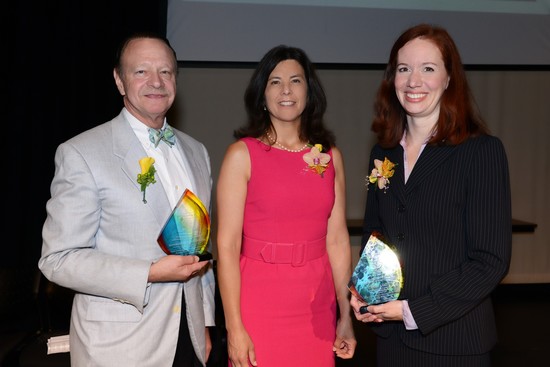 Chicago, IL - Cook County State's Attorney Anita Alvarez along with members of the office's Lesbian, Gay, Bisexual and Transgendered Advisory Council presented Pride Awards to the Honorable Sebastian Patti, Presiding Judge, Circuit Court of Cook County and Camilla Taylor, of Lambda Legal for their leadership and contributions to the LGBT community during a ceremony in commemoration of Gay Pride Month.

Judge Patti, Presiding Judge of the Domestic Violence Division, was first appointed to the bench in 1995 and elected in 1996. Throughout his tenure, Judge Patti has served in various divisions of the Circuit Court as well as a serving as a justice to the Illinois Appellate Court. Judge Patti is a member of the Illinois Supreme Court Committee on Professional Responsibility and a faculty member of the Illinois Judicial Conference. He also serves on the Committee on Racial, Ethnic and Sexual Orientation Awareness in the Circuit Court of Cook County and the Housing Court Advisory Committee.

Camilla Taylor is a Senior Staff Attorney and National Marriage Project Director in the Midwest Regional Office of Lambda Legal, the oldest and largest national legal organization committed to achieving full recognition of the civil rights of the LGBT community and people with HIV. She is currently representing same sex couples in Lambda Legal's marriage equality lawsuit in Illinois and was the lead counsel in Lambda Legal's 2009 marriage equality lawsuit in Iowa, in which the Iowa Supreme Court unanimously struck down Iowa's marriage ban, making Iowa the third state in the country to permit gay and lesbian couples the right to marry.

The Cook County State's Attorney's Pride Awards Ceremony were held Tuesday, June 25 at the Center on Halsted in Chicago.