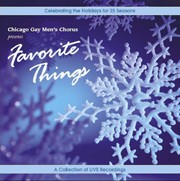 Chicago, IL - In celebration of CGMC's 25th anniversary season, the Chicago Gay Men's Chorus is releasing its third CD—conveniently in time for the holidays!

The CD, called simply “Favorite Things,” contains concert recordings of some of the group's most popular holiday music. Unlike CGMC's last two CD's, "Favorite Things" features a collection of live recordings from past holiday shows.

“We took a poll this summer to see what our chorus members' favorite holiday songs were,” says Patrick Sinozich, the group's artistic director. “I was amazed at the response—our singers have a lot of fond memories from our shows. Those songs helped shape the repertoire for our upcoming "Favorite Things" holiday show at the Athenaeum, as well as in selecting songs to be featured on the CD."

Sinozich spent the summer combing through the group's archives and remixing the recordings he found. The result is a 16-track CD of holiday music ranging from the sublime to the subversive, including a glorious “Wake, Awake,” composed by Sinozich, as well as Dolly Parton's high-octane “With Bells On” and “Santa Lost a Ho,” a little-known gem filled with delightful double entendres.