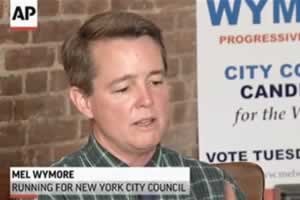 New York, NY - If Mel Wymore wins in November the New York City Council seat he seeks, he would become the highest-profile openly transgender politician elected to public office and the first in the nation's biggest city.

"I want to create the inclusive community, and it goes beyond my personal identity," Wymore, 51, told the AP in a profile. "But it actually lends a lot to my story and my credibility as a candidate. I'm honest, I'm brave, I'm forthright, and I'm willing to stand up for change."

Wymore, a Democrat with a long record of community involvement, grew up as Melanie Wymore in Tucson, Arizona, and worked for an aerospace company before settling down in New York and raising two children. At 35, Wymore came out lesbian, and a decade later transgender.

Wymore said that he had an epiphany about his identity about five years ago during an anti-bullying event.

"It suddenly hit me that it was gender that was at the core" of Wymore's unease. "And, of course, it terrified me at the same moment because I'd already been through this family-disrupting, life-changing transition."

Wymore, who faces six challengers in September's Democratic primary, has the endorsement of the Victory Fund, a group dedicated to supporting openly LGBT candidates.

In a nod to the historic nature of the race, the Victory Fund selected Wymore to receive one of its "Focus Races" endorsements, an elevated status which brings with it a large share of the group's resources and staff attention.