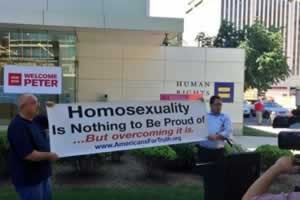 The protesters unfurled a banned which read, "Homosexuality Is Nothing To Be Proud Of ... But Overcoming It Is."

The demonstration was led by Peter LaBarbera, president of Americans for Truth About Homosexuality. HRC greeted LaBarbera with a banner which read, "WELCOME PETER."

"It's not hate, as our critics say, but as the banner says that homosexuality is nothing to be proud of," LaBarbera told the crowd.

In a press release for the protest, Barber accused the Obama administration of "aiding and abetting this radical organization."

"Because sexual anarchist groups like the HRC cannot win the debate on the merits, they must resort to underhanded and, as it now appears, outright illegal tactics in order to gain momentum for their extremist agenda," Barber said, referring to claims that HRC published IRS data from the anti-gay marriage group National Organization for Marriage (NOM).