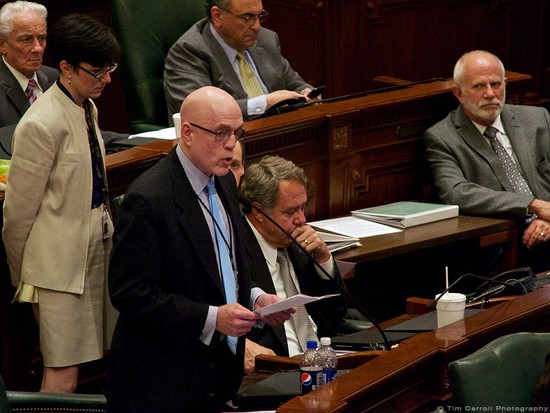 rep. greg harris announces sb10 would not be called

Harris: 'I apologize to the families who were hoping to wake up full and equal citizens'

Springfield, IL - LGBT Illinoisans are going to have to wait longer for the right to marry.

There was no vote on SB10, the legislation that would have brought same-sex marriage to Illinois, before the General Assembly adjourned for the session.

The disappointment capped two long days of waiting as activists and supporters gathered in the State Capitol for the vote. The bill's sponsor, Rep. Greg Harris (D-Chicago) maintained that a vote would not be called until the needed votes were in place. On May 21, he told Windy City Times, "When I put it up on the board, it's going to go up to win," and added that he would "absolutely" call a vote before the session ended.

But as the session's end drew near, and supporters made the trip to Springfield, the uncertainty got to be too much for some advocates. On Thursday, many held an impromptu press conference in front of House Speaker Michael Madigan's office, asking him to take action.

"We have less than 32 hours for lawmakers to keep their promise to call the bill," said Jim Bennett of Lambda Legal. "There are thousands—thousands—of Illinois families around the state who are denied dignity, vital protections and equality every single day. We need the freedom to marry and we need it now."

Friday, both Harris and Madigan walked the floor of the Chamber, trying to shore up last-minute votes, but it was to no avail. Harris reportedly met with members of House Black Caucus and then Harris and Madigan talked at about 6 p.m.

By 6:30 p.m., multiple sources confirmed to ChicagoPride.com that the session was to close without the vote. Then, shortly after 7 p.m., an emotional Harris addressed the chamber. Fighting back tears, he acknowledged that, despite several high-profile supporters, some colleagues did not have the support of their constituents and asked for more time.

"I have never been sadder to accept such a request," Harris said. He promised that the issue would be re-opened in the veto session in the fall, but added, "In the meantime, I apologize to the families who were hoping to wake up full and equal citizens."

Angry onlookers chanted "call it." Harris then received applause and a standing ovation from the House floor and chamber.

Following Harris' speech, Rep. Deb Mell (D-Chicago) urged him to continue the work. Mell and her partner, Christin Baker, were married in Iowa and had a ceremony in Chicago. She described at length how Baker had nursed her through illness, and how close they were to each other's families. "In Iowa, we're married," Mell said. "In Illinois, we have a civil union."

Another standing ovation filled with applause before Speaker Madigan closed the spring session.

"I have to say, when you are assured with such certainty that the votes were there for a vote, and then to have one not even take place, was maddening," Bennett told ChicagoPride.com.

He added that the lawmakers not standing with the issue should have been held accountable with a vote. "They should not be able to hide behind not having a vote."

Bernard Cherkasov, CEO of Equality Illinois said Illinois Unites for Marriage, the coalition advocating on behalf of the legislation, "left no stone unturned—this was not for our lack of trying."

He said he and his colleagues tried to disregard the rumors that flew through the statehouse for much of the afternoon. "We kept hoping the votes were there, and we believed nothing."

"This was a feel-good bill that a clear majority of Illinoisans wanted," he added. "The voters have a right to know who were the obstacles to that, so that, come election time, there can be a day of reckoning."

Other supporters of the legislation voiced their outrage. In a statement, Rick Garcia, policy director of The Civil Rights Agenda, said, "High priced media consultants and high-priced lobbyists don't get it done. What get's the job done is real people standing up and speaking out and that was horribly absent from this process. ... Rich guys are no longer going to drive this—we are."

"From the beginning, we have been upset about the lack of diversity and inclusion in this process," added Anthony Martinez, exec. dir., TCRA. "Unfortunately the sponsor didn't include people of color in the sponsorship of the bill and the rich white guys from the North Side of Chicago thought they could get it done with their checkbook. That was the downfall of the bill. We will continue to push and get this done."

In a statement, Gay Liberation Network's Andy Thayer called the failure "abject betrayal" and laid blame at the feet of Madigan. "Anyone who knows anything about Illinois politics knows that Speaker Mike Madigan owns the House–if he had insisted on a positive vote from his caucus, it would have passed."

Gay Liberation Network called for a demonstration 8 p.m. Saturday at Halsted and Roscoe to protest the lack of a marriage vote.