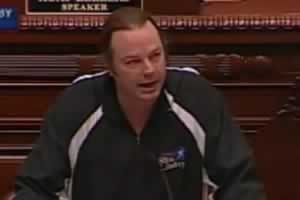 Dean, the man behind the Minnesota-based ministry You Can Run But You Can't Hide International, told his radio listeners that Minnesota Governor Mark Dayton was at "war with God" and was "about to find out what it's like as to what the fallout is when you throw rocks towards God. He's going to learn how gravity works."

"Every time the homosexuals, they're less than 1.7% of the population in the United States. You always need to remember that when they do events like this, first of all they're organized. Second of all, they come from all over the country to do this. So what you seen is probably the whole lump of the population of the homosexual community in the United States of America. So don't get disheartened by this show that the whores in the media were willing to play out for you. ... They are small in number and they know it."

"Go home," he later said, "look at your wife and look at your kids, because now that's what they're coming for."

Dean also warned that "pharmaceutical giants" were waiting in the wings for passage of a gay-inclusive anti-bullying bill to diagnose anti-gay foes as mentally ill.

"The government stealing away the sovereignty of the people, like we warned for 2 years. Coming in and bullying everybody that doesn't agree with their totalitarian system. ... That's all this bill says, by force, by force, by force. Talking of behavior. This is European, friends. And it's dangerous. And oh boy, rest assured the pharmaceutical giants are right along. They're hanging out just waiting for their opportunity now. Because now they're talking about behavior. If they come out against the homosexuality and they don't agree with that lifestyle, there must be something wrong with their head."

"The conservatives on the airwaves in Minneapolis who are sitting there playing games with the homosexuals because they think it's a puppy to be played with, when in fact it's a stinking water rat filled with rabies," he added.