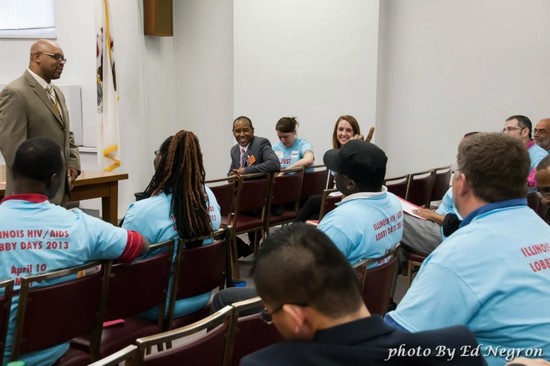 photo credit // ed negron
Springfield, IL - Springfield was abuzz Wednesday with lobby groups, including a group of about 40 Chicagoland-based advocates, who traveled by bus to Illinois' capital for the second tour of the AIDS Foundation of Chicago's (AFC) Lobby Days.

Lobby Days is an annual political advocacy event attempting to bring personal faces and stories about HIV/AIDS directly to lawmakers who will be redrafting as part of a normal budgetary process, Governor Pat Quinn's FY2014 budget.

The proposed budget, released March 6, includes $4.27M in spending cuts from the Illinois AIDS Drug Assistance Program (ADAP), the third time in as many years the budget has been slashed for that particular program, a total of 30%.

"Human services providers in Illinois have taken the brunt of all the budget cuts in the past few years, said Ramon Gardenhire, Director of Government Relations for the AFC. "We can't take any more cuts, and it's time to say ‘enough is enough.'"

Gardenhire said Lutheran Family Services organized the event that formed the heart of the lobbying-on-steroids day at the capitol, Rally for Human Care, and it happened to coincide with AFC's second day of lobbying. Joining AFC informally were the March of Dimes, Family Crisis Intervention Unit, and many more.

AFC used to travel to Springfield one time each year, but according to Gardenhire this year increased to three days to maximize participation and due to the increasing funding cuts.

"Illinois used to be one of the best ADAP states," stated Will Wilson of the Illinois Alliance for a Sound AIDS Policy (IL-ASAP), "but we've fallen off."

The group also had a secondary mission of lobbying for HB61, a bill which would repeal a 1987 law that requires Illinois health authorities to notify school principals of the names of HIV-positive students.

Illinois is the only state in the union that has this requirement, which was created over 25 years ago, when knowledge and practices in the world were very different regarding reaction to HIV/AIDS.

Wearing matching baby-blue T-shirts with "Just Advocate," a play on Nike's "Just Do It" slogan in red emblazoned on the front, and grouped into six teams organized by their status as constituents of their respective congresspersons, advocates attempted to track them down, either in their offices or at other locations within the various political buildings.

They stopped to attend the Rally for Human Care, which took place in the rotunda of the Capitol Building and was packed with lobbyist groups, congresspersons and bystanders. Several groups made rousing speeches on behalf of their individual cause. Representing AFC was Chris Wade of IL-ASAP, who made a rousing speech about HIV/AIDS needs.

The approximately 40 senators and representatives who will have a say in redrafting the budget included Thaddeus Jones (D-29), a supporter of the AFC cause and who also spoke at a question-and-answer portion of the Lobby Day, along with Rita Mayfield (D-60). Congresspersons also included Linda Chapa LaVia (D-83), another representative who reportedly supports the cause, and

Representative Greg Harris (D-13) and Senator Heather Steans (D-7), two among the sponsors of both HB61 and SB10, the well-known so-called "gay marriage" bill that would equalize marriage rights in Illinois.

Although the Capitol Building and Stratton Building was busy, almost frenzied, and often lawmakers were in session and unavailable, many aides and secretaries were given strong personal messages to give to their bosses, along with handwritten notes and sheets listing HIV/AIDS and ADAP statistics for Illinois. Over 40,000 live with HIV/AIDS in the state.

At least some of the advocates were able to track down and speak with their congresspersons about the budget cuts.

Lucy Baglin, AFC Policy Coordinator and one of the leaders of the Lobby Days event, said although the advent of the Affordable Healthcare Act in 2014 will mean more persons in need of care will be covered by Medicaid, many individuals and groups, such as persons who make over a certain amount of income, minorities, low-income persons, persons without access to transitionary assistance, and undocumented immigrants will find themselves suddenly cut off from the funding they so desperately need, which would mean a step backward in the fight against HIV/AIDS in Illinois.

"We are on the brink of an AIDS-free generation and these cuts are a huge setback," said Baglin, addressing the group before the lobbying began. "If you are going to make cuts, don't make them from this program."

In addition to the AFC, among the sponsors of this year's Lobby Days were Bristol-Myers Squibb, Pfizer, and Boehringer Ingelheim.
A final Lobby Day for 2013 will take place on May 22 when supporters from Southern Illinois will meet with lawmakers.