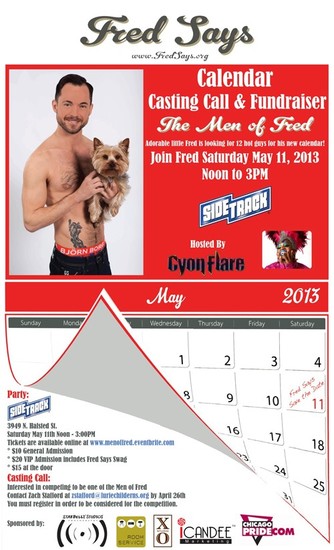 Chicago, IL - This Saturday, May 11, the popular Boystown video bar Sidetrack will host the first ever "Men of Fred" Casting Party and Fundraiser, an event aimed at celebrating the work of local nonprofit Fred Says, raising awareness around the lives of HIV+ teens and casting 12 men for the organization's first annual calendar. Guests will enjoy drinks and food while the pin-up hopefuls strut their stuff on stage and respond to interview questions delivered by host Cyon Flare.

"We knew that we wanted to eventually do a calendar that would raise money for the charity, so when we sat down with Timmy Samuels of Starbelly Studios, he brought up the idea of adding a casting party and fundraiser component to the calendar," Zach Stafford, a Behavioral Research Associate at Ann & Robert H. Lurie Children's Hospital of Chicago who also sits on the board of Fred Says, told ChicagoPride.com. "We loved this idea because it allowed us a fun and community-driven way to find people to be a part of the calendar while also raising awareness around what our charity does and [it also] gave people who may not feel comfortable being in a calendar or on stage a way to be involved."

The Saturday afternoon event will be an opportunity for attendees to meet and interact with some of the men competing for the 12 spots available in the 2014 calendar. Popular nightlife personality and entertainer Cyon Flare is playing hostess to the event and will also conduct the Q&A portion of the evening, when contestants will be given a chance to showcase why they should be one of the "Men of Fred."

While Stafford does say that looks will more than likely play a role in the decision, he insists the competition isn't just about the what the model looks like, but how well they can answer questions and interact with the crowd.

"We have told models to play up things about themselves they think will help them win... if that means taking off a shirt than they can do that," Stafford said. "It should be fun to see what all the guys will do to get a spot in the calendar."

Saturday's crowd will choose the top two men, who will win two tickets each to the Lakeview Chamber of Commerce Private VIP Pride Parade Reception and Viewing Party, provided by Wigglyville, among other prizes. After the event, Fred Says is launching a "Men of Fred" voting page on their website, where people can vote for their favorite contestants over a two week period. The top 12 men chosen will be shot for the 2014 calendar this June.

Fred Says is a 501c3 non-profit charitable organization founded in 2011 by Dr. Rob Garofalo, Director of Lurie Children's Hospital's Gender, Sexuality and HIV Prevention Center and Medical Director of the Adolescent/Young Adult HIV Program. Fred Says was founded after Dr. Garofalo adopted Fred, a tiny Yorkshire Terrier who brought peace and joy back to his life during a time when he was struggling with a cancer diagnosis and other personal, professional and health related issues, all while coping with his own status as an HIV+ individual.

"It is through his work as a physician that provides medical care to young people who are HIV+ and his own personal experience with HIV that Fred Says takes root," Stafford told ChicagoPride.com. "When Dr. Garofalo adopted Fred after his HIV diagnosis, it was the dog that gave him the hope and inspiration he needed to get through what he considers a low-point in his life."

Fred Says is the only charity exclusively focused on supporting the health and well-being of HIV+ teenagers. In the United States, approximately 40-45,000 new HIV infections occur each year, with one-half occurring in youth below the age of 25 and one-quarter occurring before the age of 21. The mission of Fred Says is to create a self-sustaining charity that ensures all HIV+ teenagers receive the care and services they need to lead healthy and productive lives while reducing the stigma associated with the disease.

The organization achieves these goals through tax-deductible charity donations, creative use of social media and the sale of items such as their newly premiered Fred Says plush toy, greeting and e-cards, t-shirts, mugs and more in their online store - available at fredsays.org. During Fred Says' initial year, The Gender, Sexuality and HIV Prevention Center at Lurie Children's Hospital and their adolescent HIV program were the main beneficiaries, but starting in 2013 the charity is reaching out to support other organizations, both in Chicago and across the nation, who promote their overall mission.

Saturday's "Men of Fred" Casting Party and Fundraiser is being held at Sidetrack, 3349 N. Halsted, from noon until 3 p.m. Tickets can be purchased for $10 online at menoffred.eventbrite.com or for $15 at the door. Special $20 VIP tickets are available and will include swag bags filled with gifts from Fred Says and their sponsors, including XO Salon, a recent addition to the Boystown neighborhood.

** Fred Says is still accepting applicants who want to compete on Saturday to be one of the "Men of Fred" featured in Fred Says' 2014 calendar. Interested parties should email Zach Stafford at ZStafford@luriechildrens.org ASAP for more information. **

More about Fred Says can be found on their website fredsays.org.