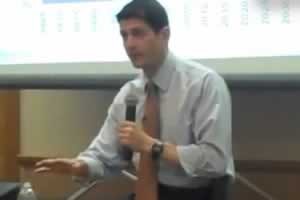 During a Wisconsin town hall, Ryan was asked to explain his long record of voting against gay rights. Ryan rates a zero percent by the Human Rights Campaign (HRC) for not co-sponsoring any of the 11 gay rights-related bills currently before Congress, including the Employment Non-Discrimination Act (ENDA) and Uniting American Families Act (UAFA).

Ryan said he would undo a 1999 vote against adoption for gay and lesbian couples in the District of Columbia.

"Adoption, I'd vote differently these days. That was I think a vote I took in my first term, 1999 or 2000. I do believe that if there are children who are orphans who do not have a loving person or couple ... I think if a person wants to love and raise a child they ought to be able to do that. Period. I would vote that way," he said.

Ryan, however, went on to add: "I do believe marriage is between a man and a woman, we just respectfully disagree on that issue."