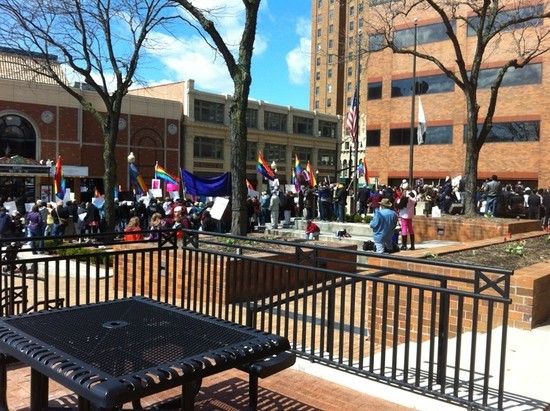 Chicago, IL - Supporters of equal marriage rights for same-sex couples will counter-protest a rally led by the anti-gay Illinois Family Institute (IFI) this Saturday at the Downers Grove office of Rep. Ron Sandack (81st), a Republican legislator who has pledged to vote for Illinois's equal marriage rights bill.

"It's a question of freedom, fundamental fairness and equality under the law," Sandack told Windy City Times. "Those are core Republican and pro-family concepts."

"It is incredibly important to counter the hate mongering and hatred that the Illinois Family Institute has been spewing against our families," said Anthony Martinez, Executive Director of The Civil Rights Agenda (TCRA). "After all, IFI is designated a hate group by Southern Poverty Law Center."

Saturday's pro-gay counter-protest, which is co-sponsored by the Gay Liberation Network and TCRA, will be held outside Sandack's Downers Grove office, 633 Rogers St. at 10:30 a.m. May 4.

"This will be a peaceful protest and we hope that families and community members who are supportive will join us in showing the community of Downers Grove that this vote affects people personally and it is the right thing to do," Martinez told ChicagoPride.com.