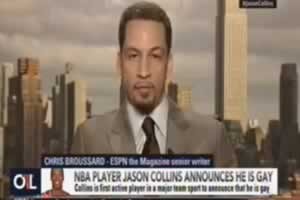 ports analyst Chris Broussard, who mainly covers the NBA for ESPN, on Monday criticized Jason Collins after he came out gay.

Brousssard, 44, made his comments during an appearance on ESPN's Outside The Lines.

"Personally, I don't believe that you can live an openly homosexual lifestyle or an openly, like premarital sex between heterosexuals," Broussard said. "If you're openly living that type of lifestyle, then the Bible says you know them by their fruits. It says that, you know, that's a sin. If you're openly living in unrepentant sin, whatever it may be, not just homosexuality, whatever it may be, I believe that's walking in open rebellion to God and to Jesus Christ. So I would not characterize that person as a Christian because I don't think the Bible would characterize them as a Christian."

Openly gay colleague LZ Granderson, who also appeared on the program, reacted strongly to the comments, saying, "I really don't need Chris or anyone else telling me if I'm a Christian, because Jesus tells me I am."