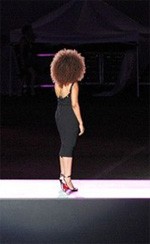 Chicago’s V103 (WVAZ-FM) during an interview with Jody Watley reportedly refused to allow her to discuss her upcoming appearance at the Gay Games. Watley performed at the opening ceremonies on July 15 at Soldier Field.

According to KeithBoykin.com, a disc jockey gave Watley instructions before her live in-studio interview not to discuss the Gay Games. The unnamed disc jockey attributed the decision to V103’s station manager. Watley complied with the gag order.

Author Keith Boykin, who also appeared at the opening ceremonies, says Watley shared details in a conversation backstage at Soldier Field before the opening. "I was surprised but I wasn’t really surprised," Watley told Boykin.

WVAZ is a Clear Channel Communications property which also owns WGCI and WKSC (KISS-FM) and several other Chicago radio stations. Watley appeared on KISS-FM the day before and openly discussed her appearance at the Gay Games.

Chicago-native Watley is a Grammy-Award winning artist who has sold more the 20 million albums and singles worldwide.