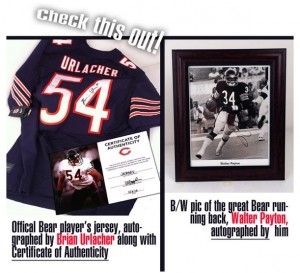 Chicago, IL - The Chicago Bears on Wednesday denied involvement with the National Organization for Marriage, a group that vehemently opposes same-sex marriage and promotes ex-gay therapy.

NOM's Ruth Institute publicized a conference, which encourages college students to oppose same-sex marriage, with images of memorabilia they claimed had been donated by the Chicago Bears. The ad included a "thank you" by NOM to the team for "supporting our message."

In a statement issued Wednesday the Bears organization made clear the team had no connection to NOM or the conference.

"The two items featured in The Ruth Institute gala invitation were personal donations to (President) Dr. Jennifer Roback Morse. Neither was a club donation, nor do they represent the team's view on any social issues. Any remarks stating otherwise are false," said the statement.

"I sign a lot of stuff for charity and I don't always know where it goes," Urlacher told the Chicago Tribune. "If I would have known it was for this cause, I wouldn't have done it."

After NOM's claims were publicized, Morse issued a statement.

"The Ruth Institute is not working with the Chicago Bears organization or any of its players past or present to promote our upcoming auction," she said.

"It's disheartening to see NOM attach a major sports franchise to its anti-gay rhetoric," said Bill Gubrud, who recently founded the Chicago-based National Gay and Lesbian Sports Hall of Fame. "Today we are seeing more teams and organizations coming out in support of the LGBT community."