Out at Wrigley returns Sat., Aug. 3 with full weekend of events 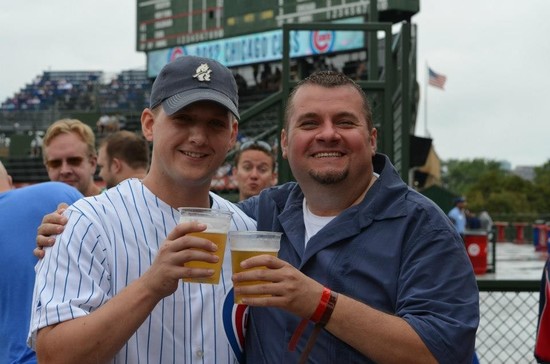 Chicago, IL - Out at Wrigley and its host committee announced details for this year's event, which is set for Saturday, August 3, when the Chicago Cubs take on the Los Angeles Dodgers. The nation's largest annual LGBT sporting event is growing even more this year, adding a special prize for a finalist of the annual national anthem contest and adding the induction of the new National Gay and Lesbian Sports Hall of Fame to create a weekend-long LGBT sports event.

"I am very excited about this year's Out at Wrigley," event organizer Bill Gubrud told ChicagoPride.com. "A finalist will receive a recording contract and we will hold our very first induction ceremony for the National Gay and Lesbian Sports Hall of Fame. It is becoming an Out at Wrigley Weekend."

This year, Gubrud wanted to generate more excitement around the Out at Wrigley National Anthem Contest and find a way to celebrate the variety of talent that the contest draws every year. So, he brought in world renowned recording artist Georgie Porgie, a Chicago native known for dance hits like "Love's Gonna Save the Day" (2002), "Sunshine" (2005) and "I Believe" (2007). At least one of the contest finalists will be selected by Georgie Porgie to receive a worldwide recording contract with his Chicago-based label Music Plant Group.

An even bigger change takes place Friday, August 2, when the National Gay and Lesbian Sports Hall of Fame holds its first induction ceremony at the Center on Halsted. More details about this new and exciting addition will be announced in the coming months on the event's new website OutAtWrigley.com.

"The The National Gay and Lesbian Sports Hall of Fame's mission is to recognize both individuals and organizations whose achievements and efforts have enhanced sports and athletics for the LGBT community," Gubrud said. "In addition, the Hall of Fame will preserve the history of LGBT individuals who have impacted professional and amateur sports and provide outreach and education to the sporting world so that LGBT youth all across the nation feel welcome and safe to participate in any and all athletic related activities."

This year's sponsors include Anheuser Busch, ChicagoPride.com, Gay Chicago TV, Grab Magazine, Windy City Media Group, The L Stop, Crew, DS Tequila, Music Plant Group and Best Gay Chicago, with the Center on Halsted and the newly-formed National Gay and Lesbian Sports Hall of Fame being named as the beneficiaries of Out at Wrigley 2013.

Two tiers of tickets are available: for $54 a piece, fans can purchase one of 300 seats in right field terrace (section 239-240), but for $130, 150 fans get VIP tickets for the recently-built Budweiser Patio, which includes all you can eat food, beer and wine as well as a complimentary gift bag. Out at Wrigley's kickoff party will be held at DS Tequila on Thursday May 9th at 9:00 p.m. and will also be the site of the first contest to find the singer of the national anthem and winner(s) of Georgie Porgie's recording contract.

Tickets can be purchased at OutAtWrigley.com, where additional event details, including more information about the National Gay and Lesbian Sports Hall of Fame and pre-event party dates and venues, will be posted as they become available.