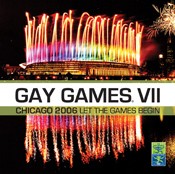 "We thank Centaur for the passion they have brought to these great CDs for the Gay Games," said Tracy Baim, board co vice chair. "We hope the music helps create a lasting legacy of the sounds of the sports and culture events."

The first Official CD for the Chicago Gay Games entitled "Gay Games Chicago 2006," mixed by XM Satellite Radio DJ Joe Bermudez is currently available in stores nationwide including Virgin Megastore and Tower Records, as well as online at www.gaygameschicago.org and www.centaurmusic.com. The Official Gay Games CDs are also available from the Gay Games store at 913 W. Belmont in Chicago.