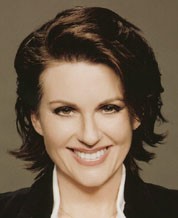 Mullally joins a slate of more than 60 music, television, arts, culture and sports legends from around the world performing in the 2006 Gay Games Opening & Closing Ceremonies.

Megan Mullally is best known for her role as "Karen Walker" on NBC's hit television show, Will & Grace. Her Emmy and SAG award-winning performances provided many of the best moments on the show. Once quoted as saying "I have like five zillion gay and lesbian friends," Mullally's popularity with the lesbian and gay community grew even stronger over the course of the eight years that the series ran before its finale in May 2006.

"I think that Karen Walker resonated with the gay community because she was such a no-nonsense personality; a campy, over-the-top smart-ass who treated you the same whether you were straight or gay," said Mullally. "The part of the Gay Games that appeals to me the most is the idea that everyone is equally welcome to participate, no matter your ability or sexual orientation."

Mullally made her television series debut with Elaine Stritch and Ellen Burstyn on The Ellen Burstyn Show. Mullally also appeared opposite Stanley Tucci as Walter Winchell's wife in Paul Mazursky's award-winning bio-pic Winchell and opposite Juliet Stevenson in Lifetime's The Pact. She has also appeared in the feature films Anywhere but Here and Everything Put Together.

Mullally made her Broadway debut in the 1994 revival of Grease with Rosie O' Donnell and appeared as "Rosemary" opposite Matthew Broderick in The Broadway revival of How To Succeed in Business Without Really Trying. In addition to her Broadway credits, Mullally has also appeared in a variety of plays and musicals in both Chicago and Los Angeles.

Mullally is also an accomplished vocalist. Mullally's recent concert appearances include The Allen Room at The Lincoln Center, The Kennedy Center, The Seattle Symphony, Chicago's Goodman Theatre, SUNY-Buffalo Performing Arts (all with her band, Supreme Music Program), and The Disney Concert Hall where she appeared as a soloist. Mullally has made two records with her band.

This September, Mullally will host her own syndicated daytime talk show on NBC,