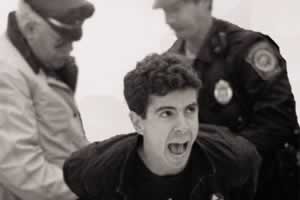 ABC Studios has bought rights to Director David France's AIDS drama How To Survive a Plague.

According to The Hollywood Reporter, which first broke the story, ABC is considering producing a dramatic miniseries based on the Oscar-nominated documentary.

Plague offers a fearless look at the rise and success of HIV/AIDS advocacy groups ACT UP (AIDS Coalition To Unleash Power) and TAG (Treatment Action Group). The powerful movie pieces together archival footage to tell the story of two coalitions – ACT UP and TAG – "whose activism and innovation turned AIDS from a death sentence into a manageable condition."

France said he envisions the miniseries will delve deeper into the early days of AIDS activism and how it helped fuel the burgeoning gay rights movement.

"We know we'd like it to be an extended story that's not just about AIDS and what AIDS wrought but about this tremendous civil rights movement that grew from the ashes of AIDS and the dawn of the lesbian, gay, bisexual and transgender movement," he told The Hollywood Reporter.

France, along with Howard Gertler and John Lyons, will serve as executive producers.