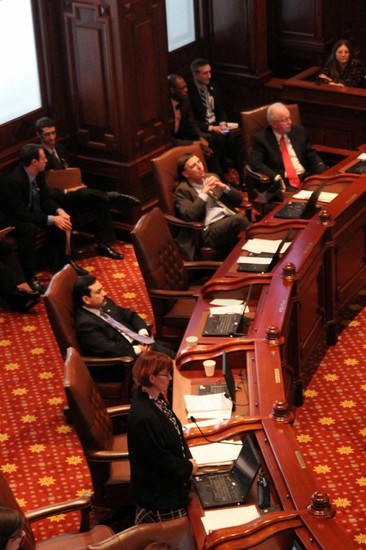 "It's time we in the General Assembly catch up to our neighbors," said state Sen. Heather Steans (D-Chicago), the measure's sponsor, just before debate began. "We can confidently and proudly vote for this bill today, because voters in the nation and our state understand and endorse this basic tenet of fairness and equality."

From the onset of the session, Steans tried to head off concerns that the legislation would negatively impact the freedoms of religious institutions. But colleagues repeatedly asked her whether churches would be forced to perform same-sex marriages.

Sen. Dale Righter (R-Mattoon) fired off a number of hypothetical questions pertaining to how the bill differentiates between educational institutions and religious ones. After several minutes of the questioning, Steans refused to answer any further.

"This bill provides a very clear exemption for church sanctuaries, parish halls and all those kinds of facilities from having to provide a space for solemnization or celebration of solemnization for same-sex marriages—we're not changing any other laws here," Steans said. "... There's not been a single case where a same-sex couple has had a lawsuit (against) a religious facility, for using that facility for the purpose of a same-sex marriage that that church does not open itself up to; this is a red herring."

Sen. Kyle McCarter (R-Decatur) later asked Steans what would change "in regards to what our children are taught."

"This bill makes no change to any curriculum in any school," Steans answered.

Both politicians then dug in their heels. McCarter reitierated his question, asking whether schools would see change "like in Massachusetts." Steans repeated her previous answer that the bill asked for no changes in school curriculums.

"I'm only going to ask one more time," McCarter replied. "Is it possible that the passage of this bill will have any effect on what is taught in our schools to our children?"

"It's the same answer," said Steans sharply. "This has no impact on any school curriculum in any school."

McCarter elicited groans from the gallery when he predicted that businesses such as bed and breakfasts and florists would eventually be forced to close after the bill's passage. He also expressed surprise when the gallery laughed as he spoke of gay friends for whom marriage was a low priority

Nevertheless, a number of senators spoke on the legislation's behalf. Sen. Iris Y. Martinez (D-Chicago) said she was supporting the bill on behalf of her family.

"I do it for my family members who are gay," Martinez said. "I have many family members—many in my immediate family—who are gay. ... We have a very loving family, and we don't discriminate."

Sen. Kwame Raoul (13-Chicago) added that everyone "could feel secure that the sky is not falling" before adding, "evolution is what we do as a body." He described how his own viewpoints on gays had changed over the years. He admitted to, when he was younger, having thought much less of a cousin who'd come out to his family.

"I evolved to realize that my cousin was no different than the cousin that I had loved before he announced to the family that he was gay, and that he was no less worthy of the family's love than before he made that announcement," Raoul said.

"After we pass this, and hopefully after the House passes this, and the governor signs it, we're going to go about our days the same as we are now," he added.

Activists lobbying on the legislation's behalf were unsurprised by today's victory but were nevertheless elated.

"I think that the lies and the hate mongering have not worked their magic the way that our opposition expected it too," said activist Rick Garcia of The Civil Rights Agenda, shortly after the vote. "They just keep bringing up the Church and education because they are looking for arguments that are going to resonate with the public."

"The Roman Catholic Church is against divorce," Garcia added. "Have we ever seen someone in this country sue the Catholic Church because it would not allow them to get divorced?"

Cherkasov agreed with recent rumors that many in the state GOP suspected that gay marriage was inevitable in Illinois, and want to get the vote behind them. Party Chairman Pat Brady, in fact, has lobbied for the legislation's passage.

"There are lawmakers, including ones who spoke today, who are just so dead-set against this, and would take any opportunity to rally against it for years to come," Cherkasov said. "But there are others who understand that this is an issue whose time has come and that we need to vote on the freedom to marry and do the right thing."

No timeline has been announced for a House vote. State Rep. Greg Harris (D-Chicago) said in a press conference following today's vote that he'd like it to happen as soon as possible. The House membership is widely expected to be a tougher sell, but Cherkasov said he was confident going forward.

"I feel really optimistic about the House," Cherkasov said. "They're going to hear the same stories from the same constituents and they're going to come around and support the freedom to marry—I hope that it happens really soon."

"We're allowing ourselves some celebration now, but this evening and tomorrow it's back to work," Garcia said. "In the end, Illinoisans are a fair-minded people and equality will prevail."

Editor's note: State Sen. Jason Barickman of Champaign was the only Republican to join a supermajority of Democrats in voting yes. Three Democrats, Bill Haine, Gary Forby and John Sullivan, voted against the bill. Democrats Patricia Van Pelt Watkins and Napoleon Harris voted present while Ira Silverstein and James Claybourne, Jr. did not vote. See how each member of the Senate voted on SB 10.