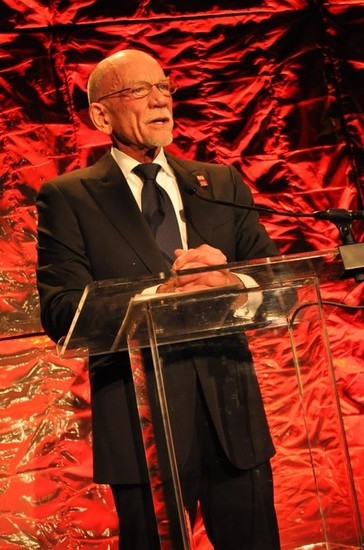 EQIL's Art Johnston: 'You all have a seat at the table of equality'

CHICAGO, Ill. - With the successful launch of a gay marriage bill in the Senate Executive Committee last Tuesday and the anticipated vote on the Illinois Senate floor on Thursday, Feb. 14, Valentine's Day, Equality Illinois' Justice For All Gala on Sat., Feb. 9, was a timely celebration and call for action.

"You all have a seat at the table of equality," said Art Johnston, Equality Illinois board member and co-owner of Sidetrack.

"This week will be a historic week in Illinois," said the governor. "This year we're going to make and pass a law called Marriage Equality."

State Sen. Heather Steans, the chief Senate sponsor of the marriage bill in the Senate, was presented with the Equality Illinois Freedom Award for her vision, courage and leadership in the effort to achieve full equality for LGBT individuals in Illinois.

"Sen. Steans has been one of the General Assembly's most vocal and passionate supporters of full equality for LGBT people, including being the chief Senate sponsor of the marriage bill," said Bernard Cherkasov, CEO of Equality Illinois.

Equality Illinois also recognized United Airlines with its Business Leadership Award for its long history of commitment to the LGBT community.

The gala co-chairs were Smith and his husband artist Jesus Salgueiro. Smith, who has cooked for everyone from Oprah Winfrey and Lady Gaga to President Obama, inspired the Southern-influenced gala menu.

Ben Cohen, the English rugby star who founded The Ben Cohen StandUp Foundation to combat homophobia and bullying, attended as a special guest of Smith and Salgueiro.

The sold-out gala also welcomed guests to a silent auction reception that included hotel stays, round trip getaways, art and a list of other items guests could bid on during the night.

Despite recent decisions and legislation in support of same-sex marriage, Chekasov told ChicagoPride.com in an interview published Feb. 7 that the fight for marriage equality doesn't just stop with its passage into law.

"In every single state where the same-sex marriage bill has been passed, there have been reforms to repeal the marriage bill, to dilute it, to weaken it. Our fight for equality doesn't end with a victory for marriage," he said.

Founded in 1991, Equality Illinois works to protect, secure, and defend the equal rights of the LGBT community. From influential politicians to dedicated volunteers and everyone in between, the well-attended gala continues to excite and humble Cherkasov.

"To see them [gala guests] all here supporting full equality for LGBT people is so amazing. It just really gives you a chance to pause and think about how far we've come as a community," he said.