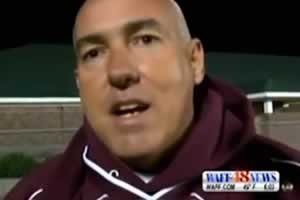 photo credit // waff.com
Rogersville, AL - Bob Grisham, the head football coach at Lauderdale County High School in Alabama, has been suspended after he was caught on tape ranting against First Lady Michelle Obama and gays.

Audio of Grisham expressing his distaste for "queers" and calling Obama "fat butt Michelle Obama" was released on the Internet last week.

In the audio, Grisham is heard blaming Obama for the school's 600-calorie lunches.

"Fat butt Michelle Obama," Grisham told his students. "Look at her. She looks like she weighs 185 or 190. She's overweight."

Another voice is heard calling the first lady a "big fat gorilla."

"Our country is going in the wrong direction, you'd better be aware of it. And people running around like, oh it'll get better, it'll get better. No, it ain't gone get no better until things change."

Grisham also prodded the students to "call the superintendent and tell her" that "I don't like queers."

"I don't hate them as a person but what they do is wrong, it's an abomination against God," he said. "I don't like being around queers."

The Lauderdale County Board on Monday suspended Grisham for 10 days without pay and ordered him to attend sensitivity classes. He will also no longer teach a psychology class, local media reported.

Grisham was recently named "Coach of the Year" by the Times Daily.