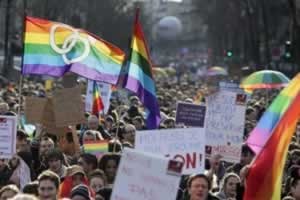 Paris, France - Thousands of activists are marching through the streets of Paris on Sunday in a show of support for the government's plans to make France the 12th and most influential nation so far to legalize gay marriage.

Demonstrators carried banners with phrases such as "Equality of rights is not a threat" as they kicked off their march from Denfert-Rochereau square.

The rally comes two weeks after opponents staged a huge protest in Paris and two days before parliament takes up the issue.

Nicolas Gougain of the Inter-LGBT association told FRANCE 24 that supporters were not "in competition" with opponents.

Strong opposition to the proposed reform appears to have taken the government by surprise.

However, a new poll shows opponents making little headway in changing public opinion. The survey conducted for the news website Atlantico.fr found 63 percent of respondents support marriage equality, up 3 percent from the start of the year. Support for adoption rights for gay couples also rose three points, from 46 to 49 percent.

"Following the demonstration on January 13 we expected less people to back [the reform]," Jerome Fourquet of the polling agency Ifop said. "But our findings show the opposite. Support for the plan is increasing – particularly on the Left."