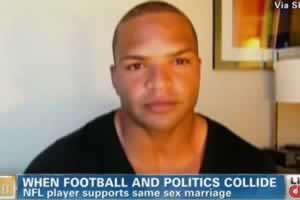 The 36-year-old Ayanbadejo, who advocated for passage of a marriage equality law in Maryland, told The New York Times that after he helped his team secure passage to this year's game he reached out to advocates to offer himself as a spokesman.

"Is there anything I can do for marriage equality or anti-bullying over the next couple of weeks to harness this Super Bowl media?" he asked in an email sent at 3:40AM Monday to leading advocate Brian Ellner.

Ellner told the Times that Ayanbadejo "understands that as a straight biracial player in the Super Bowl, he can have a huge impact on the future of this issue."

Ayanbadejo said he hopes to take his message to The Ellen DeGeneres Show.

"That's my ultimate goal after the Super Bowl," he said. "To go on Ellen's show, to be dancing with her, to bust a move with her."

Of course, DeGeneres is married to actress Portia De Rossi.