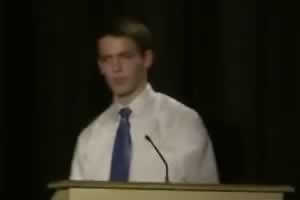 A high school senior's coming out speech at Princeton High School in New Jersey was greeted with a standing ovation.

In accepting an award for "Class Actor" in front of 300 of his fellow classmates, Jacob announced that he's LGBT.

"I would like to thank everyone for voting me Class Actor," Jacob said. "Sure, I've been in a few plays and musicals, but more importantly I've been acting every single day of my life."

"Unlike millions of other LGBT teens who have had to act every day to avoid verbal harassment, physical violence I'm not going to do it anymore."

"It's time to end the hate in our society and accept the people for who they are, regardless of their sex, race, orientation or whatever else may be holding back friendship."