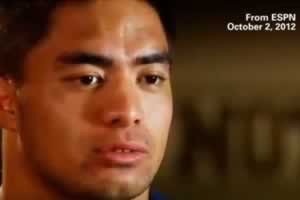 South Bend, IN - Pundits are asking whether Notre Dame star linebacker Manti Te'o is gay after reports surface that his dead girlfriend was a hoax.

Te'o, a finalist for the Heisman Trophy, inspired countless fans by leading his team to victory hours after learning of the death of his grandmother and girlfriend.

However, Deadspin.com on Wednesday reported that the girlfriend, Lennay Kekua, never existed. Te'o, who said his love affair took place online, has claimed that he is the victim of an elaborate hoax.

Dukes said the possibility that Te'o is gay "makes a lot of sense."

"Let's hypothesize, he's gay. He is a star football, college football player, with beautiful chicks surrounding him, propositioning him all the time with all kinds of media asking him, 'Are you dating chicks? Do you have a girlfriend?' All the time."

On Mike Francesa's radio show, a caller asked: "Is Manti Te'o the greatest homosexual linebacker of all time?"

For his part, Te'o isn't talking.