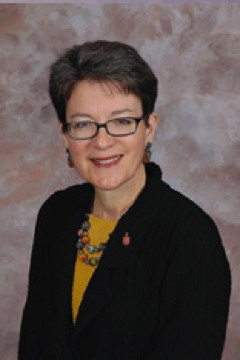 photo credit // http://www.umcnic.org
Chicago, IL - The bishop of the Northern Illinois Conference of the United Methodist Church has joined other business and church leaders in a show of support for the Illinois Marriage Equality Bill, which would allow same-sex couples to marry in Illinois.

Bishop Sally Dyck said in a statement, "I believe it is to the benefit of our families, communities and the state of Illinois for the Marriage Equality Bill to become law in our state."

Dyck leads the Northern Illinois Conference of the United Methodist church, which includes over 370 churches in the Chicago, Aurura, DeKalb, Elgin and Rockford areas.

"Today the new General Assembly of the State of Illinois is expected to discuss and soon vote on the Religious Freedom and Marriage Fairness Act. It is expected that it will pass into law. I want to express my views on it and my support of it as law.

I believe in the institution of marriage as the source of emotional and legal stability and security for families and communities.

In May I will have been married for 37 years. I have many friends who are not presently married and have never married, but I believe most of them have wanted to find a lifelong relationship to which they are committed for spiritual, physical and emotional comfort and support.

And I have friends, acquaintances and former parishioners who have been in lifelong relationships with someone but have not been able to have their relationships recognized by the state or the church because they are in a same-sex relationship. In spite of all the same pressures and stresses that heterosexual couples face, they have managed to stay faithful and true to each other, providing stability and strength not only for their families but for their communities and churches.

Marriage also provides stability and security for me in a way that I usually take for granted especially as both my husband and I grow older. We just assume that we can be with each other in the emergency room or that if, God forbid, something happens to the other that we will be provided for through our combined resources. After all, we've built those resources together over the last almost 37 years.

But same-sex couples can't assume the same benefits, not even the benefit of being with each other should there be an emergency or in critical last moments to hold the other's hand... no one should have to be getting permission to be by a loved one's side at a time like that but that is the reality for same-sex couples.

I believe in marriage because it also is the institution that best provides for the well-being of children. I believe that children need to have parents who have the emotional and legal benefits of marriage as well as parents who are active in their lives.

In addition to the benefits of marriage that I have described above, I also believe that the State of Illinois needs to be on the forefront (if #10 of 50 is the forefront) of providing for marriage equality in order to promote economic growth. People look for places to work and start businesses that will attract as many good workers, entrepreneurs and business people as possible and a marriage equality state can provide that added edge to the competitive economic market.

While the United Methodist Church holds that the practice of homosexuality is incompatible with Christian teaching, it also holds the teaching and a long tradition (albeit a struggle every inch of the way) of civil rights. Marriage equality is a civil rights issue; it provides for all what is afforded to some.

The marriage equality act in Illinois does not bind anyone who is licensed by the state to perform marriages to perform a marriage for a same-sex couple (as no one can bind us to perform a marriage for a heterosexual couple). In fact, even though I support this legislation, I can't perform a same-sex marriage as a United Methodist clergy person and as the bishop I can't give permission to any other clergy to do the same. But just because I can't provide the service of marriage to same-sex couples doesn't mean that I should prevent people from being able to commit their lives to each other in the State of Illinois.

Therefore, I believe it is to the benefit of our families, communities and the state of Illinois for the Marriage Equality Bill to become law in our state. Not all United Methodists will agree with my belief on marriage and they are entitled to their own belief. Because I believe in marriage, it's my belief it will be a benefit for this law to pass.