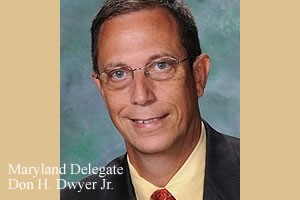 Annapolis, MD - Maryland Delegate Don Dwyer has blamed a drinking problem on passage of a gay marriage law in the House of Delegates.

Dwyer, a Republican from Pasadena, was charged with drunken boating in August after his 27-foot powerboat collided with another boat on the Magothy River. The incident left a 5-year-old girl with a fractured skull.

In an interview with the Capital Gazette, Dwyer, who insists he is not to blame for the accident, said his drinking increased over two events: his November 2011 separation from his wife of 31 years and he felt "betrayed" by colleagues who voted for marriage equality.

The day before the vote, Dwyer, an outspoken opponent of gay rights, told reporters that he had enough support to block the bill in the House. However, the measure narrowly cleared the chamber with the help of two Republicans, Wade Kach and Bob Costa.

Dwyer accused Kach and Costa, along with former Democratic Delegate Tiffany Alston, of selling him out.

"That betrayal really affected me," he said. "I was physically ill. You pour your heart into an issue like that and it's devastating."

Voters in November upheld the law after opponents put it on the ballot.