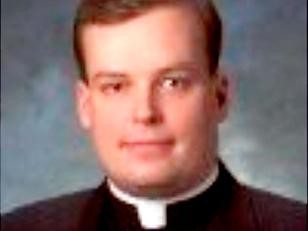 father tom donovan as seen in his linked-in profile

Springfield, IL - A Catholic priest from the Springfield diocese headed by Bishop Thomas J. Paprocki, who testified against Illinois' marriage equality bill, is on administrative leave after calling 911 to report that he was unable to remove a pair of handcuffs he'd been "playing with."

"I'm going to need help getting out before this becomes a medical emergency," Father Tom Donovan told a dispatcher during the Nov. 28 call.

"You're stuck in a pair of handcuffs?" the dispatcher asks.

"(I was) playing with them and I need help getting out," Donovan responds.

His voice on the 911 tape released Friday by police sounds garbled or muffled. When police arrived at the St. Aloysius church, they discovered Donovan in the church's rectory where he was also wearing a gag.

Donovan told the dispatcher that he was alone in the rectory when he was gagged and cuffed. There has been no explanation as to how Donovan handcuffed and gagged himself.

St. Aloysius church is under the Diocese of Springfield headed by Bishop Paprocki since June 2010. Paprocki lead a group of three that testified against Illinois' gay marriage bill on Thursday.

"The pending bill would radically redefine what marriage is for everybody," Bishop Paprocki said before a Senate Executive Committee. "Laws have long-term consequences because laws teach—they tell us what is socially acceptable, and what is not."

Bishop Paprocki and the diocese have remained tight-lipped about the matter. Kathie Sass, spokeswoman for the Springfield diocese, would not disclose Donovan's whereabouts to the Illinois Times or say whether he is staying at a church-affiliated location.

Bishop Paprocki made national headlines in September 2012 when he told parishioners that voting for Democrats, "makes you morally complicit and places the eternal salvation of your own soul in serious jeopardy."