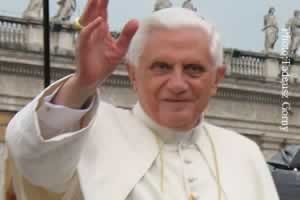 Pope Benedict's anti-gay marriage comments have sparked a White House petition asking for the Roman Catholic Church to be recognized as a hate group.

The "We the People" petition was submitted on Christmas Day and has received nearly 2,000 digital signatures.

"In his annual Christmas address to the College of Cardinals, Pope Benedict XVI, the global leader of the Roman Catholic Church, demeaned and belittled homosexual people around the world," the petition reads. "Using hateful language and discriminatory remarks, the Pope painted a portrait in which gay people are second-class global citizens. Pope Benedict said that gay people starting families are threatening to society, and that gay parents objectify and take away the dignity of children. The Pope also implied that gay families are sub-human, as they are not dignified in the eyes of God."

In his annual Christmas address given at the Vatican, Benedict denounced gay unions as a manipulation of sexual identity and dedicated the coming year to promoting family values.

"People dispute the idea that they have a nature, given to them by their bodily identity, that serves as a defining element of the human being," the Holy Father said in one of his most important speeches of the year. "They deny their nature and decide that it is not something previously given to them, but that they make it for themselves."

"The manipulation of nature, which we deplore today where our environment is concerned, now becomes man's fundamental choice where he himself is concerned."

Benedict and the Vatican have increased their opposition as predominantly Catholic France debates the issue of marriage equality.

"Upon these remarks, the Roman Catholic Church fits the definition of a hate group as defined by both the Southern Poverty Law Center and the Anti-Defamation League," the petition states.

To receive a response from the White House, a "We the People" petition must reach 25,000 signatures within 30 days of its publication.