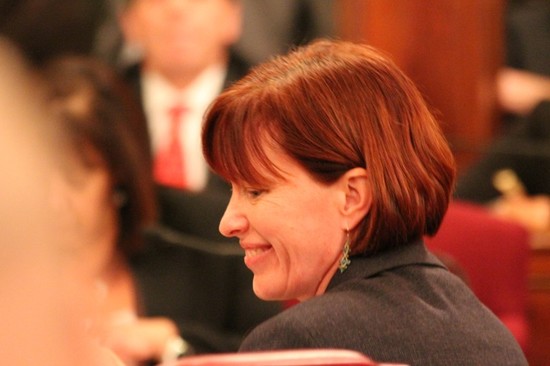 Springfield, IL - An emotional day for activists, politicians and community members fighting for marriage equality was capped Thursday with an 8-5 vote to move the Religious Freedom and Marriage Fairness Act to vote on the Senate floor. But the Senate vote, which many had speculated could happen that day, will have to wait until the Generally Assembly meets in its new session.

"Timing does not look like it is on our side for this push to a vote," said Bernard Cherkasov, exec. dir. of Equality Illinois. "But I think that everything we've built these last few months is going to work in our favor, and that it will be voted on relatively quickly," he added.

State Sen. Heather Steans (D-Chicago), the sponsor of the legislation, had been confident that there would be enough support to call a vote this week. But Senate Democrats failed to secure the votes needed to waive a 24-hour rule on the posting of the original marriage bill. They then tried tacking the legislation onto another, unrelated bill, but three Senators who were expected to vote "yes" were gone Thursday. Those were state Sen. Suzi Schmidt (R-Lake Villa) whose mother had passed away; Senate Majority Leader James Clayborne (D-Belleville), who was dealing with a family health issue; and state Sen. Jeff Schoenberg (D-Evanston), who has been out of the country.

"Sometimes getting the right number of votes can be a shot in the dark," he said. But he emphasized the significance of the executive committee vote. "This means we are one step closer."

In a statement released shortly after the vote, Cherkasov said that the vote would come in the new General Assembly, which begins Jan. 9. But Garcia said it would be a mistake to wait. He told Windy City Times late Thursday, "What I have learned ... is that on every piece of legislation I have worked on, there are dark times, when you think it's not going to go. You push forward, and you stand firm, you move and move until you can't move any more. To throw in the towel now is a stupid maneuver."

Cherkasov told ChicagoPride.com that sponsors worked late Thursday evening until they exhausted all options to pass the bill on the Senate floor before the lame duck session closed.

The committee session was tense, as state Sen. Dale Righter (R-Mattoon) spent a considerable amount of time questioning the legislation's impact on religious freedoms. He worried that a church or religious organization that accepted public money could be compelled to perform same-sex marriages.

Ralph Rivera of Illinois Family Institute echoed those concerns. Since most religious organizations in the state have 501(c)(3) status, and are exempt from property taxes, "No church in Illinois would be exempt from this rule," Rivera said.

Bishop Thomas J. Proproki of Springfield added, "The pending bill would radically redefine what marriage is for everybody ... Laws have long-term consequences because laws teach—they tell us what is socially acceptable, and what is not."

But Camilla Taylor of Lambda Legal testified that the language was in the bill to ensure that religious institutions would not be compelled to perform the ceremonies. Furthermore, it emphasized provisions already written into the Human Rights Ordinance, among other laws.

The bill's opponents were pushing back against a provision that was intended to bring them to the table, according to Anthony Martinez of The Civil Rights Agenda. "It was put in to enhance the religious protections that were already put into place by the state," Martinez said. "It's unfortunate that they felt that they had to push back against something that was trying to bring them to the table."

Garcia said that opponents of same-sex marriage are running out of arguments. "These are the same tired old arguments that they keep bringing up," he said.

Rivera and Poproki's arguments were not enough to sway the committee. After the 8-5 vote, the chamber erupted in cheers.

"I'm very excited about this outcome," Martinez said. "We've had to wait a little longer than we'd anticipated, but we're excited to finally be here. Hopefully people understand that we're closer to the finish line.

"It is going to come down to the community," Martinez added. "We really need the community to step up and tow the lines and get out there phones and contact their senators and their representatives."