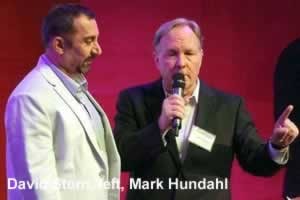 Los Angeles, CA - Mark Hundahl, a co-owner of gay alternative Frontiers, died on Thursday after losing a battle with cancer. He was 61.

Hundahl passed away early Thursday morning, with his wife and her family by his side, according to the blog LGBT | POV, which is hosted by Frontiers.

At the time, Hundahl and co-owner Jon Hirsh were busy working on Probe, their highly successful Hollywood gay disco.

In 1983, Carmack and Hyde turned to Hundahl to help their struggling venture. He gave them $5,000 in exchange for two years' worth of advertising.

"Greg told me that he and Jerry started the magazine to be an advocacy magazine," Hundahl said. "They made Frontiers the voice of the Los Angeles gay community and had the foresight to become part of the strong advocacy movement across the United States. In L.A., lots of people wanted to read it. It struck a never at the right place and right time."

Hundahl met David Stern when he moved his advertising to Edge magazine, where he was working as a sales associate. The pair would later become business partners, launching IN LA magazine, a Frontiers sister publication.

In 2007, Hundahl and Stern bought Frontiers.

Los Angeles Mayor Antonio Villaraigosa called Hundahl "a tremendous ally in the fight for equality, breaking down barriers and providing a voice to the voiceless."

"He left an indelible mark on the LGBT community and will be sorely missed," he said. "My thoughts and prayers are with Mark's family and those he touched with his life. I'm lucky to have known Mark and witness the amazing impact his work had on the community."