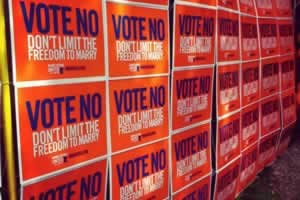 The two Democrats are moving forward with legislation after voters in Minnesota became the first in the nation on November 6 to reject a proposed constitutional amendment banning such unions.

Minnesotans United for All Families, the coalition of groups which worked to defeat the ban, will transform into a lobbying group to support passage of the bill.

"Minnesotans were asked whether we should limit the freedom to marry in the last campaign, and they resoundingly said no," the group's leader, Richard Carlbom, told the Pioneer Press on Thursday. "We believe it's time to move forward from that."

The group which worked to approve the ban, Minnesota for Marriage, on Thursday sent out a fundraising appeal to supporters.

"Yes, we lost the battle, but the fight to preserve marriage is not over," Minnesota for Marriage Chairman John Helmberger wrote.

Helmberger noted in his letter that even while Democrats regained control of the Legislature, voters in 75 of the state's 87 counties approved the amendment.